AMERICA/GUATEMALA - The Bishops: the already fragile State of law in the Country is in danger, it is necessary to respect the Constitution 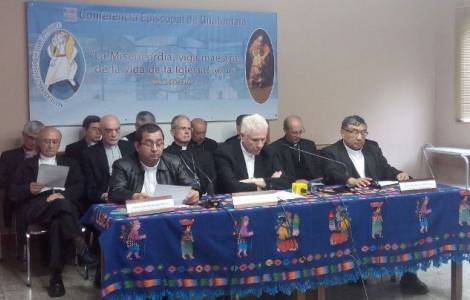 2020-06-06
Bishops: "the pandemic is a sign of the times, God calls us to return to him, human life is fragile and inconsistent"

2020-04-16
Bishops in the United States and Mexico: in times of pandemic "stop deportations in the name of the suffering people"

Guatemala City (Agenzia Fides) - "Huge concern and great indignation in the face of the events which took place in past days", were expressed by the Bishops of Guatemala in a statement signed on 10 January by the President of the Episcopal Conference of Guatemala, Bishop Gonzalo de Villa Vasquez, Bishop of Sololà-Chimaltenango, and by the Secretary General, Mgr. Domingo Buezo Leiva, Bishop of Izabal.
Tension increased in Guatemala following President Jimmy Morales' decision to expel the International Commission against Impunity in Guatemala (Cicig), a decision blocked by the Constitutional Court. Mgr. Alvaro Ramazzini, Bishop of Huehuetenango, had pointed out that Morales's provision "undermines the rule of law and compromises respect due to the laws of the country ... it halts the process started and the decisions agreed in the peace agreements", including the dismantling of criminal organizations within the state and the fight against corruption and impunity.
"We strongly criticize the open conflict between the current Government of the Republic and other legitimately constituted State bodies - says the Bishops' text, sent to Agenzia Fides - a clash that endangers the already fragile Rule of law in the Country. For this reason we reaffirm the need to defend the primacy of the state and respect for the law, starting with the political Constitution of the Republic, as a fundamental requirement for those who hold positions in the governing bodies of the State and for every citizen". The Bishops, however, see "the coherent actions with the law undertaken by the Constitutional Court, a body established to determine the correct interpretation of the Constitution of the Republic".
The Episcopate decisively rejects "the polarization that, taken to the extreme, degenerates into violence, with serious consequences for social peace" and "in this way the energies that should be used to go towards the solution of serious fundamental problems of the country are removed, such as lack of attention regarding health, education, social inequality, unemployment, migration, people affected by natural disasters, lack of respect for human rights". These and many other factors are detrimental to the quality of life of most of the population, "especially the poorest, who survive in deplorable living conditions".
Citing the recent speech by Pope Francis to the Diplomatic Corps on the need to regulate relations among peoples based on law, justice, treaties and not by force, arrogance or violence, the Bishops hope that the next electoral consultation "takes place under conditions of a rule of law" and invites all Guatemalans "to inform themselves adequately, to think without being manipulated and to adopt criteria to be able to discern respect to propaganda and information disseminated by social networks and other media". They therefore urge to make every effort to ensure that the upcoming elections are "opportunities to find solutions" and are not tainted by interests contrary to the common good, corruption or illicit financing. "We call the population to elect their representatives in conscience and freedom", they strongly reiterate.
The message concludes by asking God for his blessing to grant everyone an authentic conversion "to the fundamental values of the Kingdom of God, the sense of the common good, the life of the poorest, peace and reconciliation". (SL) (Agenzia Fides, 11/1/2019)

AFRICA/TOGO - Covid-19: reopening of some parishes on an experimental basis; the contribution of the special fund of the PMS arrives

ASIA/BANGLADESH - Cardinal D’Rozario to the faithful: return to mass