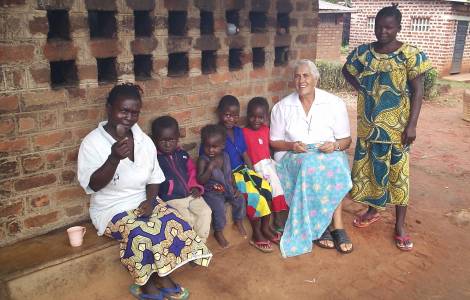 2020-02-27
Appointment of the National Director of the PMS, Fr. Innocent Blaise Ndongbo

2019-09-07
Carmelites: "Education and development are our mission in the young heart of Africa"

Bangui (Agenzia Fides) - "On 5 January 2019, the Foyer Community of the Comboni Missionary Sisters in Bangui, in Central Africa, was attacked and robbed by a gang of about 8-9 people – said the Superior General of the Comboni Missionaries, Sister Luigia Coccia to Agenzia Fides -. There are three Sisters in the Community.
They had finished the prayer of vespers, around 7 pm, when they were attacked, immobilized and threatened for about three hours. The thieves searched everywhere and stole everything they could. The three sisters, in shock, left the mission temporarily and took refuge in the provincial house, also in Bangui".
"Central Africa seems to have become muddled in an inextricable tangle of foreign interference, defaults by the international community and the inability of the local government" wrote Fr. Federico Trinchero, Carmelite missionary of the Carmelo of Bangui, a short time ago to Agenzia Fides.
"The confessional element only makes the cocktail even more deadly" the missionary underlined (see Fides 18/12/2018).
There have been countless attacks on Catholic communities, parishes, camps hosting refugees, houses and churches burnt down, civilians brutally killed. Five priests were killed in the Central African Republic in 2018: Don Joseph Désiré Angbabata, of the diocese of Bambari, wounded during an assault on his parish and died shortly thereafter; Don Albert Toungoumale-Baba, killed in Notre Dame de Fatima parish, during a massacre perpetrated by an armed group that attacked the parish; Don Firmin Gbagoua, Vicar General of the Diocese of Bambari, killed by assassins; the Vicar General of the diocese of Alindao, Don Blaise Mada, and Don Celestine Ngoumbango, parish priest of Mingala, killed during the assault on the on the Bishops’ residence of Alindao, where they had taken refuge with other people. In the latter circumstance, the former Seleka rebels of the UPS (Unité pour la Paix en Centrafrique) killed at least 60 people, the majority were displaced persons who were in a reception camp near the Cathedral (see Fides 17/11/2018). (SL) (Agenzia Fides, 7/1/2019)