AFRICA/CAMEROON - The auxiliary Bishop of Bamenda kidnapped twice by separatists 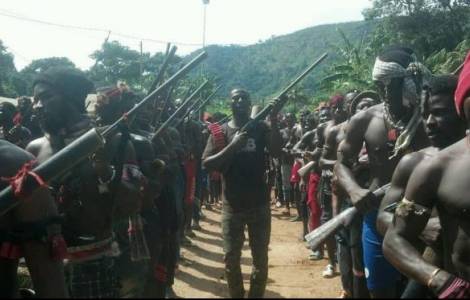 2020-07-20
Peace talks between government and separatists in the bishop's residence: the Church promotes dialogue and reconciliation

2020-06-02
"Today in Cameroon apart from known, reported or detected cases, one does not have an idea or the exact proportion of the development of COVID-19", says a priest

2020-04-22
Appeal of the Bishop of Bamenda to end the conflict in the English-speaking regions: "Now is the time for peace"

Yaoundé (Agenzia Fides) - "They threatened that they’re going to kill us", said His Exc. Mgr. Michael Miabesue Bibi Auxiliary Bishop of Bamenda, in the English-speaking part of Cameroon, who was detained twice this month by armed groups.
On 5 December he attempted to travel from Bamenda, the capital of the North West region, to Kumba, 170 kilometres to the south west, intending to celebrate mass. However, on the road near Batibo his car was stopped and held up by a group describing itself as the “Amba Boys”.
"They saw that I was a Roman Catholic bishop, but they were not willing to listen to me, they demanded my phone and the phones of my driver and his brother", said Bibi.
The next day the bishop once again encountered an armed group on the road towards Buea. Bibi was due to celebrate mass on 7 December.
He had been warned that a group of nuns also had difficulties on the road. They were stopped by the Amba Boys and consequently arrived late for a church service. Nevertheless, Mgr. Bibi went ahead with his journey because he was "doing missionary work".
The armed separatists said the bishop should not be travelling owing to the “ghost town” protest that was in force for the day – travel was prohibited.
"It was actually scary", said Bibi, describing how the armed group kept him for the second time in the forest, this time for four hours. They said he was “breaking the law” for travelling that day given the stay-at-home protest intended to paralyse the area.
"Finally by the grace of God they liberated us", says Bishop Bib. On this occasion, the local leader of the Amba Boys ordered his men to give back the Bishop's telephone and let him continue his journey.
The Church is paying a high price for the crisis in the two English-speaking regions of Cameroon. On November 21, Fr. Cosmas Omboto Ondari, a Kenyan missionary belonging to the Missionary Society of St. Joseph of Mill Hill, was killed in Kembong. On 20 July, Fr. Alexandre Sob Nougi, 42, aparish priest of the parish of the Sacred Heart in Bomaka, in the diocese of Buea was killed (see Fides, 23/7/2018). On 4 October a seminarian, Gérard Anjiangwe, was killed in circumstances similar to those of Fr. Cosmas, while he was in front of the parish church of Santa Teresa di Bamessing, a village near Ndop in the department of Ngo-Ketunjia, in the northwest of Cameroon. (L.M.) (Agenzia Fides, 21/12/2018)