VATICAN - Apostolic Movements and new communities: "great announcers of the joy of the Gospel in Angola" 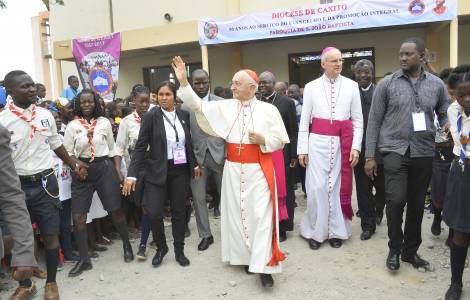 Caxito (Agenzia Fides) - This morning Cardinal Fernando Filoni, Prefect of the Congregation for the Evangelization of Peoples, during his pastoral visit in Angola, met representatives of the apostolic movements and of the new communities of the ecclesiastical Province of Luanda, in the parish of São João Baptista, in Caxito.
"Pope Francis sends his greetings and apostolic blessings for all the members of the Movements, Associations and new ecclesial realities that you represent and which are a living expression of the perennial youth of the Church!", said the Cardinal at the beginning of his speech, expressing appreciation for the Christian witness in the Angolan society and for the work carried out, with dedication and self-denial, in the communities and in the dioceses by the various movements and associations.
Ecclesial movements and new communities are "a special gift of the Lord" for the communities and a "precious resource for the life of the Church", because through them "many Christians, adults, young people and children, aware of their missionary vocation, with a lively conscience and authentic faith, actively participate in the organic pastoral care of their Churches and dioceses. You are great announcers of the joy of the Gospel". The Cardinal Prefect of the Missionary Dicastery therefore stressed that all the members of the movements of the territories under the jurisdiction of the Congregation for the Evangelization of Peoples "must have clear awareness of being called to be authentic missionary disciples".
With satisfaction, Cardinal Filoni also noted that "the collaboration of the laity with their priests helps to make the Church alive in Angola", but despite the growth of the local Church and the progress of the work of evangelization, the Gospel is not yet deeply rooted: many Catholics still follow sorcery, superstitions, magic ... "It would be nice if you consider this phenomenon in your evangelization, to help everyone have full trust in Jesus Christ", highlighted the Cardinal.
The Prefect of the Congregation for the Evangelization of Peoples therefore exhorted the representatives of the apostolic movements and of the new communities to live in communion, to work together in the same Church; to give "a lot of space" in their respective activities, to prayer, as a "place of encounter with Jesus"; to engage in the formation of a profoundly Christian laity who is also a "missionary disciple".
"Finally - he concluded - I would like you to involve young people in your evangelization, and for them to be active, and that your movements can say together: Together with young people let us bring the Gospel to everyone". (SL) (Agenzia Fides, 17/11/2018)

ASIA/PHILIPPINES - Proclaiming the Gospel with courage, as a family: the path of "Couples for Christ"

ASIA/PHILIPPINES - The Bible is the most widely read book in the Philippines: 10 million copies have been distributed over 10 years