VATICAN - Young Angolans for a Church that goes forth: Cardinal Filoni’s encounter with the youth of Saurimo 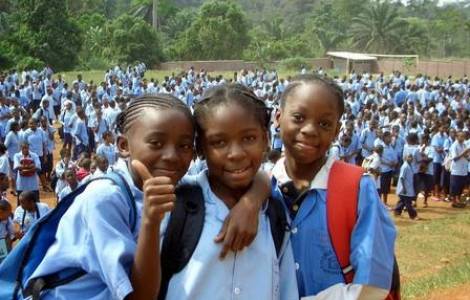 Saurimo (Agenzia Fides) - Cardinal Fernando Filoni’s encounter with the youth of the ecclesiastical province of Saurimo, as part of his pastoral visit in Angola (see Fides, 9/11/2018), took place on the afternoon of Monday 12 November and had as its backdrop the recently celebrated Synod of Bishops, dedicated to young people. "Your Church has a good number of apostolic movements and many associations, which include many young Catholics, actively engaged in spreading the Gospel and serving the brothers in need", the Cardinal recalled at the beginning of his speech, bringing the blessings of Pope Francis and the affectionate greetings of the Synodal Fathers. "I would like to make my own some of the provocations that Pope Francis suggests", he continued, referring to "a Church that goes forth", to the invitation to be "missionary disciples" and to the journey of pastoral and missionary conversion of young people. "It has to do with knowing what kind of young Angolan the Church needs in order to truly be a 'Church that goes forth', he said.
The Prefect of the Missionary Dicastery then proposed some food for thought to the youth. Young missionary disciples are those who become aware of the missionary dimension of their baptism. But this is why it is necessary "to meet Christ and let oneself be met by Him". "A young man who lets himself be met by Christ - the Cardinal said - is one who emerges from himself, his selfishness, his self-sufficiency, his self-referentiality ... The so-called modernity offers many distractions to young people and this certainly does not help them listen to the Master and not even to discern in life".
A young person 'that goes forth', with the Gospel in the streets and in the suburbs, is he who goes to the geographical and existential suburbs, as the Holy Father says; he is the one who embarks on an unpredictable adventure, he is constantly challenged to deal with the new, with the disconcerting ... "to always demand new and demanding answers, never to be satisfied with prefabricated solutions and schemes".
On the testimony of love, remembering that among young Angolans "there are a good number of them who, witnessing love as volunteers, are engaged in various forms of service with associations and ecclesial movements", the Cardinal urged them "to participate in these activities offered by various groups, as this enriches individual experiences ...
By living and witnessing love, you create a culture of communion, unity and reconciliation".
Many young people are frustrated because they cannot prioritize their lives. "A young person for a Church that goes forth is able to distinguish interesting and enjoyable things from important and indispensable things, even if these are not attractive and interesting for them". "Dear young people - he exhorted - know how to set priorities, the right priorities. This is generally a challenge; a challenge that could force you to give up some of the things you like best, but are not the most important things on the scale of values".
One last observation concerned the ability to reject some cultural elements and modernity: "Say no to the ethnic and tribal divisions that undermine the life of the communities ... know how to say no to fetishism, witchcraft. Therefore - said Cardinal Filoni - it is urgent to reject such behavior contrary to the spirit of the Gospel. Hence the need for a complete and adequate religious formation. To this end, I encourage you to participate in the various apostolic movements". (SL) (Agenzia Fides, 13/11/2018)

AFRICA/IVORY COAST - Last tribute to Anne Marie Say Tanoh, icon of the sacred choral song, "her life was a program for God"

AFRICA/TOGO - Covid-19: reopening of some parishes on an experimental basis; the contribution of the special fund of the PMS arrives