VATICAN - Cardinal Filoni's exhortation to the Bishops of Saurimo: "be united and supportive" 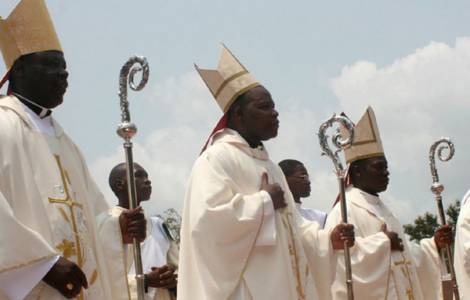 Saurimo (Agenzia Fides) - A vibrant exhortation to be "united and supportive", to consolidate the spirit of ecclesial and fraternal communion and solicitude for the sister Churches, so that the ministry is fruitful, was addressed this morning by Cardinal Fernando Filoni, Prefect of the Congregation for the Evangelization of Peoples, to the Bishops of the Ecclesiastical Province of Saurimo, on the second day of his pastoral visit in Angola (see Fides 9/11/2018).
"The Church in Angola is becoming increasingly lively, dynamic, busy and constantly growing - the Cardinal highlighted - as evidenced by the growing number of priests, local religious men and women, children of this land, and the progress of the process of rooting . We see the creation of pastoral structures and the organization of your dioceses, the commitment of many lay people, especially catechists, in the field of evangelization, the Sunday attendance of the faithful to churches, their participation in the sacraments, the solidarity demonstrated especially in times of difficulty".
The Prefect of the Missionary Dicastery stressed that "this movement should belong to all your ecclesiastical Provinces, without excluding any diocese", and exhorted the episcopal communion, becoming more aware of the collegial dimension of the ministry entrusted, which must be realized especially in the context of the same ecclesiastical Province: "together, and in close collaboration with one another, you can progress in the work of evangelization".
Cardinal Filoni then focused on some pastoral priorities. Each Episcopal Conference is called to take care of the spiritual and moral growth of the people of God present in its jurisdiction. "As far as social and political questions are concerned, even if they are an integral part of the Church's field of action in its mission of evangelization, they should not be privileged to the detriment of reflection and profound work concerning the serious ecclesial and pastoral issues that upset your Christian communities". The priority tasks for the Angolan Episcopate, indicated by the Cardinal, are the attention given to priests, religious men and women, care for candidates to the priesthood or consecrated religious life, the assistance of the laity, in particular young people and families, through an integral and permanent formation.
In this regard the Prefect of the Missionary Dicastery cited some problems of morality and discipline in the clergy, although the diocesan and religious clergy sometimes work in very difficult conditions but with great zeal and devotion. Some diocesan religious institutes of consecrated life have serious difficulties: internal conflicts or with the diocesan Bishop, tribalism or superstitions, financial or moral problems ... this is why he invited the Bishops to "intervene firmly in order to cure these evils". We must then be attentive to priestly formation so that the priesthood is not considered "a social promotion, a means for self-affirmation, to acquire worldly prestige". The Cardinal also called on the Bishops to be attentive to the life and functioning of the Seminaries as to the formation of the laity, so that they may be able to participate actively in evangelization and in the mission of the Church.
In the concluding part, Cardinal Filoni noted the difficulty of making the Gospel penetrate deeply into the cultural strata and popular traditions: "The superstitious beliefs and practices, witchcraft and magic that condition people's daily lives and nourish the fear and suspicions are still alive in Christian communities. Priests and religious are not exempt from this situation". (SL) (Agenzia Fides 12/11/2018)