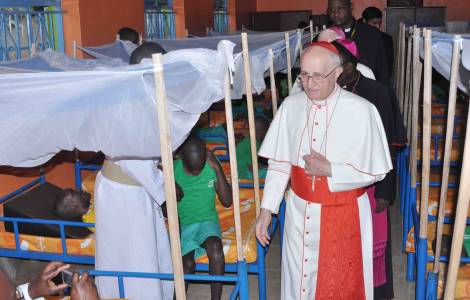 Vatican City (Agenzia Fides) - The Prefect of the Congregation for the Evangelization of Peoples, Cardinal Fernando Filoni, will be on a pastoral visit in Angola and the archipelago of São Tomé and Príncipe from 10 to 20 November, to conclude the celebrations of the 50 years of the Episcopal Conference (CEAST) of the two Portuguese-speaking countries.
The Prefect will arrive in Luanda, the capital of Angola, on the evening of Saturday 10 November. On Sunday 11 November he will visit the Clarisse nuns and in the afternoon he will meet priests, men and women religious from the dioceses of Luanda, Caxito and Viana.
On 12 and 13 November he will visitthe ecclesiastical province of Saurimo, where he will have a series of meetings with the local authorities, the Bishops, missionaries, priests, seminarians, the religious, the young and lay movements. In the afternoon of the 13th he will celebrate the solemn Mass in the Cathedral.
On Wednesday 14, in Luanda, Cardinal Filoni will meet the President of the Republic, and in the afternoon, in the major Seminary, the formators of the ecclesiastical province of Luanda, and the seminarians, diocesan and religious.
On Thursday, November 15, in Lubango, the Prefect, after a courtesy visit to the Governor, will have a meeting with Bishops, priests, deacons and religious from the ecclesiastical province, then with the novices and their formators, in Mapunda, and in the afternoon with the seminarians of philosophy and theology, in the seminary of Jau. At the end of the day he will celebrate Mass with seminarians, formators and lay people in Jau. The following day the meeting with the laity and with the cloistered nuns is scheduled. In the afternoon the Cardinal will celebrate Mass in the Cathedral, then he will return to Luanda.
On Saturday, November 17, two main meetings are scheduled: in the morning with representatives of the apostolic movements of the ecclesiastical province of Luanda and in the afternoon with the youth, in the Cathedral of the diocese of Viana.
On Sunday, November 18, in the parish N.S. of Fatima in Luanda, Cardinal Filoni will preside at the solemn Mass for the closing of the celebrations for the 50th anniversary of the Episcopal Conference of Angola and São Tomé (CEAST). In the afternoon the Cardinal will meet the Bishops and will preside the vespers at the end of the visit in Angola.
On Monday 19 and Tuesday 20 November the Prefect will be in the archipelago of São Tomé and Príncipe, where he will visit different locations (Trindade, Almas, Pantufo, Guadalupe, Neves ...) and meet local authorities, priests, men and women religious, missionaries and parish representatives. On the evening of November 20, the Cardinal will leave São Tomé to return to Rome.
The Episcopal Conference which brings together the Bishops of Angola and São Tomé (CEAST) was established in 1967 and previously included Mozambique. The independence from Portugal, in 1975, marked a new chapter also in the history of the Church in Angola and São Tomé, with the erection of new dioceses and the consolidation of Catholic communities. Currently Angola has 5 ecclesiastical provinces with 5 archdioceses and 14 suffragan dioceses, while São Tomé has only one diocese. (SL) (Agenzia Fides, 9/11/2018)