AFRICA/CAMEROON - Christian and Muslim religious leaders: dialogue and peace must prevail in the English-speaking regions 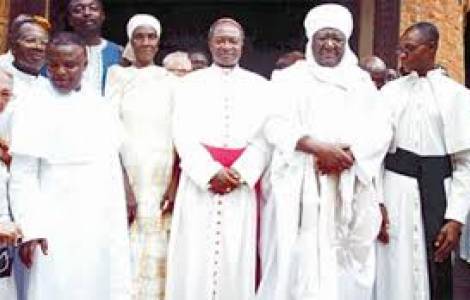 2020-04-22
Appeal of the Bishop of Bamenda to end the conflict in the English-speaking regions: "Now is the time for peace"

2020-02-21
Anglophone crisis: Bishops from all over the world ask President Biya to participate in peace talks

Yaoundé (Agenzia Fides) - In Cameroon, Christians and Muslims join forces to demand that peace prevails in the English-speaking provinces. In a joint statement, the Council of Protestant Churches, the Supreme Islamic Council and the Catholic Episcopal Conference join their voices to denounce the increasing violence that has occurred in the last two years and call for the cessation of "indiscriminate arbitrary killings by secessionist armed groups and Cameroonian armed forces". Mgr. Samuel Kleda, Archbishop of Douala and President of the Bishops' Conference of Cameroon, Sheikh Oumarou Malam, member of the Islamic Supreme Council, and Fonki Samuel Forba, leader of the reformed Churches have called on the government, political parties, the diaspora and groups armed secessionists to sit at a table and start a dialogue that leads to a definitive solution of the political-military crisis.
Instability began in 2016 when lawyers and English teachers demonstrated so that they would be allowed to continue using the common law system in courts and could continue to teach English in schools. They were joined by large sections of the English-speaking population who feel marginalized and dominated by the Francophone legislative and educational system. These protests led to strikes and then degenerated into deadly clashes between security forces and supporters of the English-speaking regions.
Last May, the Catholic Episcopal Conference, after condemning the violence, offered to mediate between the various parties involved in the conflict, but its appeal was ignored. At the end of July, Christian and Muslim religious leaders, among whom Card. Christian Tumi, Archbishop Emeritus of Douala, Pastor George Fochang Babila, of the Presbyterian Church of Cameroon, Imam Tukur Mohammed Adamu of the Central Mosque of Bamenda (North West) and Chief Imam Alhaji Mohammed Abubakar, of the Central Mosque of Buea (South -over) launched the proposal to convene a national conference to bring together the English speakers of the Country. Even this appeal, however, fell on deaf ears. The government of Yaoundé opposed and did not allow any meeting to take place.
On September 19, the religious leaders of Cameroon asked the government to look for "a solution at a national level, taking into account its deep and real causes". They also urged to punish those responsible for violence, military or civilian. A few days before the presidential elections take place on 7 October, religious leaders invite political parties to give priority to resolving the crisis in their programs. "However, "hate speech" must be avoided", religious leaders concluded, "since" words can further worsen the situation", while today more than ever it is urgent to embark on a path of dialogue, to achieve peace. (EC) (Agenzia Fides, 22/9/2018)

AFRICA/IVORY COAST - The Bishops express their condolences to the Muslim community following the death of Cheick Aimah Boikary Fofana, a great figure in interreligious dialogue

AFRICA/SOUTH SUDAN - A missionary: "The pandemic must not stop the peace process"

AMERICA/ARGENTINA - "Affirming certainties and strengthening commitments": Mgr. Lozano at the Te Deum for the 210 years of independence

AFRICA - Africa Day: a hard-working, fair and stable Africa is reborn from the Covid-19 crisis

AFRICA/BURUNDI - Elections: "Voting took place in a peaceful manner, but we have found several irregularities", say the Bishops