AMERICA/COLOMBIA - Mgr. Henao: to stop the killings of social leaders, we need to build "community leadership" 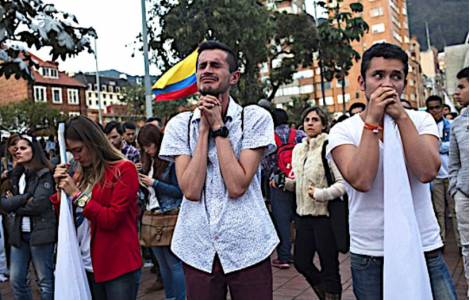 2020-07-13
The Nuncio: "In order to achieve reconciliation, one must have the intention and I believe that a large part of Colombia wants it"

2020-06-13
More dialogue and less violence in families: the fruit of the Family Month

2020-06-10
In addition to the pandemic: the historical virus of violence and the abandonment of the state and corruption increases

Bogota (Agenzia Fides) - 311 social leaders murdered in two and a half years. This is the dramatic data released at the beginning of July by the Office of the People's Defender (ombudsman) of Colombia, referring to the period from 1 January 2017 to 30 June 2018. In response to this emergency, Caritas, together with the General Public Prosecutor of the Republic, USAID (US Agency for International Development), Indigenous National Organization of Colombia, National Association of Afro-Colombians Internal Refugees (Afrodes), with other civil society organizations, and with national mass media such as Caracol TV, Blu Radio and El Espectador, is promoting the "Lideramos la vida" campaign to make visible and protect social leaders across the country.
The physical elimination of these leaders has increased after the signing of the peace agreements with FARC, as the territories previously occupied by the guerrilla organization are now "no man's lands" at the mercy of the fight between criminal factions. "We are feeling the impact of the killing of our social leaders", said Mgr. Héctor Fabio Henao, president of Caritas Colombia and of the national committee of the Council of Peace in a live broadcast on social media with the participation of Agenzia Fides. "In a society that has suffered such a long conflict", the prelate continued, "the sense of humanity is reduced, the ability to come into contact with the suffering and the capacity for solidarity". This is why community leaders are "key persons who take on the concrete needs of the communities" with great generosity, because they feel a strong sense of belonging and identify with them".
They are also necessary for the cohesiveness of the social fabric: "I realize that there are no real communities where people communicate only in social media". "Society needs leaders, in all fields, and those who make a flag of social rights" such as access to water, land or communication routes "ensure a permanent dynamic of searching for an alternative to possible life for the most vulnerable people", said Mgr. Henao. The Prelate emphasized above all the need for "protecting communities", which identify "the weak points of exposure to risks" and establish protocols of personal and community self-protection as an antidote to violence. An even more effective solution is the construction of a "community leadership", the Bishop told Fides, so that "it is not a single person who pulls all the others, but is the collective to discuss the problems, to reflect, to look for solutions and to set goals".
In this the physical elimination of a person becomes useless, since there will be no solitary leaders. The contact with the authorities, which Caritas and the Peace Councils promote, is also fundamental, "because we have adopted measures and security measures that are not known". In this sense, Mgr. Henao calls for a "much greater" effort on the State to get the effectiveness of these rules at a local level. Faced with the resignation of many people, the answer is "the strong determination to exercise citizenship to rebuild the nation". To overcome the temptation of the absence of hope, the prelate cites "very interesting examples of communities that have firmly decided to make great transformations and have succeeded". "This gives light, and we must insist on creating trust between local actors and authorities, dialogue and building bridges". "There is a lot of fear in the communities", he notes, but there is also "so much tenacity", witnessed by the local Peace Councils, "by indigenous communities, Afro-Colombians and peasants, to build protector environments, solid communities" and serious proposals of peaceful cohabitation.
On the suspension of the peace talks between the government and the ELN guerrillas until the new Executive takes on responsibility, Mgr. Henao admitted that the news worries, above all for the non-fulfillment of a ceasefire, but does not abandon hope and indicates the need to "continue working to resolve the situation through dialogue". (SM) (Agenzia Fides, 6/8/2018)

ASIA/IRAQ - Chaldean patriarchate: the expulsion of Iraqis carried out by the USA is "Inhuman and immoral"