VATICAN - Mgr. Bodet and the new universal impulse of Missionary Childhood, from Paris to Rome 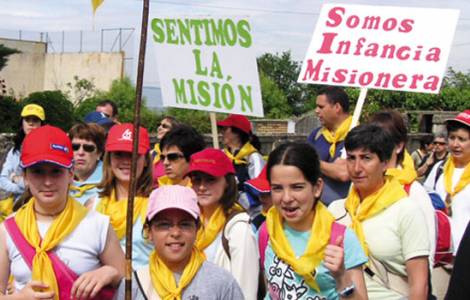 Vatican City (Agenzia Fides) – Mgr. Henri Bodet died in the French diocese of Angers on 19 June. He was National Director of the Pontifical Mission Societies in France from 1978 to 1982 and Secretary General of the Pontifical Missionary Childhood Society from 1982 to 1993. During his mandate, the International Secretariat of the Society was transferred from Paris to Rome, thus inaugurating his service on the premises of Propaganda Fide on October 1, 1983, on the feast of St. Therese of the Child Jesus, patron of the missions.
"The transfer of the headquarters of the Society from Paris to Rome - said Mgr. Bodet in an interview to Agenzia Fides on March 28, 1984 - consecrates, in a certain sense, an evolution which began a few years ago, as regards to the type of service that was generally attributed to the Society of the Holy Childhood, as regards to the location of those responsible for his action. The Society of the Holy Childhood distinguished itself for a long time, for the initiatives of Western Churches at the service of the countries of mission, through the spiritual and material help of the Christian children associated, but its action progressively evolved towards a form of exchange of testimonies of faith and charity among children of all Christian communities, of old and recent evangelization ... These factors contributed to give the Society a more universal direction and structure, extending its action to all particular Churches and to all the dioceses".
Sister Roberta Tremarelli, current Secretary General of the Pontifical Society of the Holy Childhood, comments to Agenzia Fides: "The universal spirituality that animated Mgr. Bodet during his mandate is evident: he had faith in children and in the objectives that the Society, since its origins, sought to reach, by involving and animating every Christian child, from any cultural and social context, to the missionary dimension of his/her faith. We recall his generous collaboration with the Pontifical Mission Societies and the support he gave to the development of the National Directorates and the expansion and renewal of the Missionary Childhood Society, also through a network of diocesan and local leaders in order for them to be closer to the children".
Henri Bodet was born on July 2, 1923 in Cholat, diocese of Angers, and was ordained priest on June 30, 1947. From October 1959 to August 1967 he was a missionary in Dakar, Senegal. He was the first Secretary of the Regional Episcopal Conference of West Africa, and he also participated in the Second Vatican Council. In 1967 he was called to work at the Secretariat of State, until 1978, when he was appointed National Director of the Pontifical Mission Societies of France. On May 4, 1982, he was appointed Secretary General of the Pontifical Society of the Missionary Childhood. (SL) (Agenzia Fides, 23/6/2018)