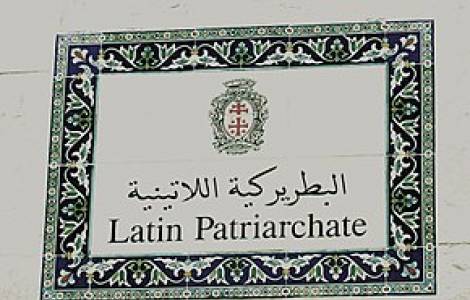 2020-05-13
Ecumenical bodies to the EU: say no to the illegal annexation of Palestinian territories

Jerusalem (Agenzia Fides) - Archbishop Pierbattista Pizzaballa ofm, Apostolic Administrator of the Latin Patriarchate of Jerusalem, has established an Economic Council as an advisory body in charge of assisting the Patriarchate in the management of financial, economic and administrative matters. The Council, which will be called to meet in plenary session several times a year, will be constituted, besides the Patriarch (or the Apostolic Administrator) and the Patriarch's treasurer, also by six lay members (three from Jordan, one from Israel, one from Jerusalem and one from Palestine), all experts in the economic-financial sector. Issa Hijazin, a priest of the Latin Patriarchate and a professor of Sacred Scripture at the Latin Patriarchate of Jerusalem, will also be part of the organism. "In reality" Fr. Issa Hijazin told Fides - I do not understand economic matters. When he asked the Apostolic Administrator what my role should be, he told me that I would simply have to help the other members not to forget that the Church has a sui generis nature, that it is not a profit-making economic society, and therefore also economic issues must be faced with a logic and a different spirit from what happens in multinational companies or financial companies".
According to the Institution Decree, whose details have been releasede by abouna, org website, the Council will be divided into two sub-councils - one for Jordan and one for Israel and Palestine - and will have to discuss the revision and of the annual budget prepared by the Treasurer and the administrative offices of the Patriarchate, the consultancy regarding appointments in administrative offices and the most important economic-financial matters (such as those concerning the purchase and sale of real estate), as well as the monitoring of the financed projects from the patriarchate and the review of schools budgets. To prevent the possibility of commingling between the management of the patriarchate's resources and individual or family interests, the decree establishes that the Patriarch’s relatives or those who take his place cannot be part of the economic Council, up to the fourth degree of kinship.
In the Letter addressed to all the members of the Latin Patriarchate at the beginning of Lent 2017 (see Fides 4/3/2017), Archbishop Pizzaballa had written among other things that in the recent past "mistakes and wrong decisions have been made which have affected the life of the Patriarchate, financially and administratively, mainly concerning the American University of Madaba. We had failed in some important areas, perhaps not focused enough on our primary mission: preaching the Gospel and dedicate ourselves to the pastoral activities".
The incident referred to by Archbishop Pizzaballa is the American University of Madaba, AUM, affiliated University of the Latin Patriarchate of Jerusalem, and the first stone on May 9, 2009 was blessed by Pope Benedict, and was inaugurated on May 30, 2013 in the presence of King Abdallah II. At the end of 2014, the Holy See had to intervene to take charge of administrative and financial problems that had marked the construction and startup of the academic institution. (GV) (Agenzia Fides, 20/6/2018)

ASIA/ISRAEL - Jerusalem, appeal of the Greek Orthodox Patriarchate on the disputed buildings has been rejected