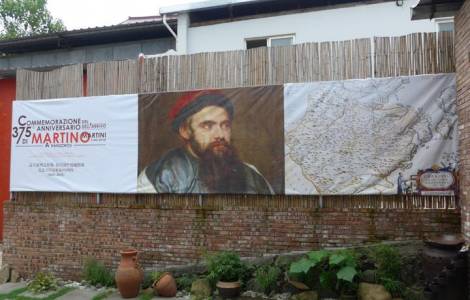 Hang Zhou (Agenzia Fides) - An exhibition dedicated to the cartographic work of Jesuit Fr. Martino Martini (1614-1661) was inaugurated at the headquarters of the China-Italy Center in Hang Zhou, the capital of the Chinese Province of Zhe Jiang, to commemorate the 375th anniversary of the arrival of the great missionary in the city.
The inauguration took place on June 2. Hundreds of academics and scholars, both Chinese and Italian, took part in the event, co-organized by the China-Italy Center for Culture and Trade, by the Martino Martini Italian Study Center, by Edulife Italy-China and by the Association for the Promotion of Chinese culture Abroad of the Province of Zhe Jiang.
Martino Martini, in Chinese Wei Kuang Guo, historian, geographer, cartographer, but above all a Jesuit missionary, is universally recognized and appreciated as a pioneer of cultural exchange between China and Italy, between Chinese and Western culture. "His cultural contribution" underlined the President of the China-Italy Jiang Xue Ji Association during the inauguration "was also expressed through the various geographic maps of China displayed in the exhibition, which represent an invaluable historical heritage. A 'trophy' of the cultural, scientific and friendship exchange between China and Italy, between China and the West".
The city of Hang Zhou has never forgotten Fr. Martino, dedicating him a commemorative monument that rises in the area where there was once the Catholic cemetery. It is a monument considered a historical heritage of the Province. The parish of Hang Zhou dedicated to the Immaculate Conception, built by Father Martini thanks to the donations of two converted women, is a place of living memory of the great Jesuit, who shared the same missionary approach as his confrere Matteo Ricci.
Martino Martini was born on 20 September 1614 in Trento, from a family of merchants. In 1632 he moved to Rome and on 7 October, in the church of Sant'Andrea al Quirinale, he entered the Society of Jesus. On 22 July 1638, he received a mandate to leave for China. Other confreres set out on December 19, 1641, disembarking on August 4, 1642 in Macao. In the first months of 1643, he entered China together with Fr. Giulio Aleni, vice-provincial of the Jesuits. After a year in Nanjing, he reached the city of Hang Zhou. During the years of his mission in China he visited several cities, also Beijing, capital of the Empire, and the Great Wall. He died in Hang Zhou on June 6, 1661 at the age of 47. His missionary journeys also allowed him to gather scientific information, especially regarding the geography of the Chinese Empire. Thanks to his linguistic and cultural preparation, similar to that of his confreres - from Matteo Ricci, to Michele Ruggieri, to Giulio Aleni -, Fr. Martini was the first editor of a Western-style Chinese grammar, and the first European geographer to compile geographical and cartographic works (the most famous of which, entitled Novus Atlas Sinensis, dates back to 1655) based on the knowledge of the territory of China. He was an original promoter of the dialogue between European and Chinese culture. (NZ) (Agenzia Fides, 13/6/2018)

ASIA/THAILAND - “The cycle of time resumes ”: risen with Christ, Christians look to the future

AMERICA/CHILE - Jesuit Fernando Montes: the strategy of tension that obscures the "Mapuche issue"