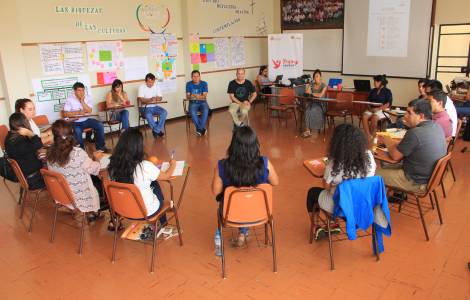 Sacrofano (Agenzia Fides) - Fr. Fabrizio Meroni, PIME, General Secretary of the Pontifical Missionary Union (PUM), Director of the International Center for Missionary Animation (CIAM) and Director of Agenzia Fides, delivered his speech at the General Assembly of the PMS in progress in Sacrofano (see Fides 25/05/2018), on Thursday 31 May.
"During the five-year period from 2015 to 2020, - said Fr. Meroni -, the study and discernment aimed at the radical renewal of the missionary animation of PMU and CIAM, are based on constructive cooperation effort for the necessity of continual formation of the particular Churches linked to the Congregation for the Evangelization of Peoples (CEP). The work of meeting, visiting and listening directed at the comprehension and analysis of the current and potential needs of the missionary training has characterized the year 2016. Attempts have been made to understand the true needs of permanent formation of the local Churches and whether PMU and CIAM can contribute to answering this need. From this investigation, the prerequisites were identified on which to base the action, the focus of 2017, involving formation activities ad experimentum, which were programmed and aimed at responding to the changed needs of the current evangelization".
Thanks to the mediation of the PMS National Directors and to the direct visits to the local Churches, a form of dialogue has been established which is the indispensable prerequisite to delineate the reform of these institutions, responding to the real missionary needs. During the year 2017, the collaboration, ad experimentum, with formation initiatives and activities in local Churches in Africa, Asia and Oceania began, assuring the work of content, methodological and economical assistance "in order to create courses and projects aimed at the permanent missionary formation of the clergy (mainly diocesan), the religious (particularly religious communities of diocesan right) and Christian lay people committed either pastorally (catechists, community leaders and pastoral agents) or in secular professional environments".
Fr. Meroni highlighted that in the framework of permanent missionary formation "PMU favors a formative intervention at a diocesan and national level in agreement with the local Bishops. CIAM wishes to offer missionary formation opportunities with more universal attention, by connecting and circulating resources, experiences and reflections coming from different parts of the world, from various Christian communities and from heterogeneous cultural and religious experiences".
The formation courses offered at various levels in the local Churches answer a specific need so that the "missionary animation is inserted into the normal life of the Christian communities and can answer the real formative needs for the growth of their faith and their Christian witness". The development of local, regional or continental human resources, allows the encouragement and support, also financially of a missionary formation and an opening towards the universality of the Christian faith which does not overlook contextualized needs and necessities. The wish is to overcome exotic heroism of isolated brilliance of the mission to serve the ordinary Christian life of the faithful lay people, clergy and religious communities who face the daily challenges of proclamation and witness in the territory where they live".
CIAM’s proposals for missionary formation in these experimental five years revolve around two fundamental methods: First of all, continuing to offer courses of missionary formation addressed to the National and Diocesan Directors of PMS along with their collaborators, grouped into linguistic areas. Secondly, organize cultural missionary activities, in the form of Study Seminars (SSEM), focusing on themes and realities that are presented as current challenges for the Church’s mission in the various geographical and socio-cultural contexts. In the final part of his speech, Fr. Meroni illustrated the procedure, for the request of interventions for initiatives of permanent missionary formation. (SL) (Agenzia Fides, 1/6/2018)