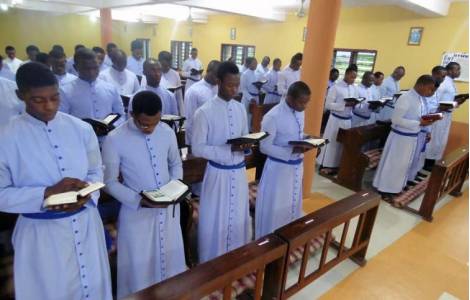 Sacrofano (Agenzia Fides) - Fr. Fernando Domingues, MCCJ, Secretary General of the Pontifical Society of St. Peter the Apostle (POSPA), introduced his annual report to the Assembly of the PMS: "We are happy to acknowledge that most Christian communities in the world today are ready and happy to collaborate generously for the formation of our future priests and consecrated persons, especially in the mission areas of greater need. The spirit of solidarity continues to grow in our societies at large and particularly in our Churches. Our National Directions, together with the International Secretariats, are called upon to be the main link between this growing solidarity and the particular areas of need in our young Churches".
Speaking to the National Directors of the PMS on the afternoon of May 30, Fr. Domingues recalled the commitment of POSPA following the publication of the new Ratio Fundamentalis Institutionis sacerdotalis (16 December 2016), through the creation of a Working Group "that meets regularly to encourage and accompany the work of the seminaries as they integrate the orientations of the New Ratio in their formation programs and also the work of the Episcopal Conferences as they organize the elaboration of the new Ratio Nationalis in their own pastoral areas". This year, a new magisterial document was published, which is relevant to the formation of the clergy in general and to seminaries in particular. It is the Apostolic Exhortation Veritatis Gaudium (VG), of Pope Francis, on the Universities and Ecclesiastic Faculties (29 January 2018). "These indications of the Magisterium will certainly configure the documents that will guide the formation of future clergy and religious in the areas served by our Pontifical Mission Societies - emphasized the Secretary General - and they will need also to guide the setting of those priorities that are to be concretely supported by the subsidies of the Society of Saint Peter the Apostle".
Fr. Domingues then identified three particular areas around which the service of POSPA is concentrated: formation of the formators (through courses, conventions, assemblies, scholarships...); economic support for propaedeutic and philosophical seminaries; collaboration with the Centre for Child Protection, supporting the formation of priests and nuns.
On presenting the POSPA budget, the Secretary General highlighted, among other things, that "many seminaries, at all levels of formation, have started concrete initiatives to produce at least part of their food and to raise locally at least a part of the funds they need. Many other seminaries have also initiated a variety of activities of animation in the local Christian communities, which encourages those same communities to develop various forms of collaboration with the seminary. For the near future this will mean, hopefully, that the seminary can count on more economic and spiritual support from the local Church. In the long run, the local Churches will thus grow in feeling responsible for the formation of their future pastors". Another encouraging sign reported by Fr. Domingues concerns "the growth of religious families of contemplative life in the mission territories", just as an example, of the 56 religious congregations present in Kenya, 11 are of contemplative life; in the year 2017 they received 31 new members for the first year of noviciate. (SL) (Agenzia Fides, 31/5/2018)