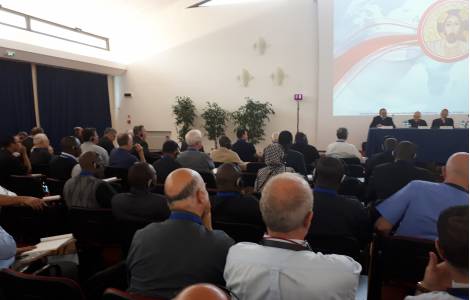 Sacrofano (Agenzia Fides) - " October 2019 should help bring the entire People of God to a new awareness of Christian baptismal responsibility for the Church’s mission to evangelize to the ends of the earth. It was decided that for this initiative the International Secretariat of the Pontifical Missionary Union PMU should be the “motor and promoter”, in other words, the coordinating soul of the PMS, together with the CEP and Pontifical Urbaniana University (PUU)". This is what Fr. Fabrizio Meroni, PIME, General Secretary of PUM, Director of CIAM and FIDES, said this morning, opening the works of the ordinary session of the General Assembly of the PMS (see Fides 25/05/2018), with a session dedicated to the Missionary month of October 2019.
Fr. Meroni recalled the fundamental stages of the path carried out so far, from the approval of the initiative by Pope Francis to the various preparation meetings, at different levels, underlining the four dimensions that must characterize the Extraordinary Missionary Month, indicated by Pope Francis in his speech to the PMS National Directors on 3 June 2017: 1. A personal encounter with Jesus Christ living in his Church: in the Eucharist, in the Word of God, in personal and in community prayer. 2. Witness of missionary saints and martyrs (canonized and not). 3. Biblical, catechetical, spiritual and theological formation, for missionary activity. 4. Missionary charity as commitment on the part of the whole Church share the “costs” of Gospel’s proclamation and of the formation in the faith and in mission, especially in the most needy Churches.
On Sunday 22 October 2017, World Mission Day, Pope Francis sent a letter to Cardinal Fernando Filoni, Prefect of the CEP, entrusting him "the task of starting preparations for the event, in particular by means of capillary sensitization in Particular Churches, Institutes of consecrated life and Societies of Apostolic Life, and associations, movements, communities and other ecclesial realities". During the midday Angelus on that same Sunday the Holy Father made a public announcement to the whole Church expressing his intention to call an Extraordinary Missionary Month for October 2019 to celebrate the 100th anniversary of the Apostolic Letter Maximum Illud issued by his predecessor Pope Benedict XV, “with the purpose of reawakening awareness of the missio ad gentes and working with new impulse to further the missionary transformation of life and pastoral activity”.
Fr. Meroni then recalled, among the initiatives, that an International Theological-Missionological Congress is being planned, organised by the PUU, with the theme “Missio ad gentes. From Maximum Illud to Evangelii Gaudium”, and from the meeting with the Union of Superiors General the possibility of reflecting together on the theme "Proclamation, Sacrament and Witness in the missio ad gentes" was considered. "The central role of the CEP and the PMS in this preparatory stage - emphasized Fr. Meroni - demands collegial activity where the National PMS Directors represent an important element of mediation and encounter with the local Churches... whatever is achieved, produced and indicated by us in Rome is proposed as an incentive so that the local needs of mission contextualize every activity of EMM OCT2019 for the benefit of the proclamation of the Gospel, celebration of the Sacraments and Christian witness".
The preparation of a common text on missionary animation for EMM OCT2019 is already underway with input of human resources and ideas from all over the world. The text will be published hard copy and digital and will serve as the fundamental material, the ‘basis’, to encourage local ecclesial creativity.
"Besides the International Congress organized by the PUU - continued Fr. Meroni - we are also examining the idea and opportunity of formative, missionary, academic events, or concerning pastoral experience, to plan at a continental level: two in Africa (French-speaking and English-speaking) two in Asia (one in India and the other in the ‘Asian Pacific’ region). The fifth American Mission Congress (CAM) to be held in July 2018 in Santa Cruz, Bolivia, represents this same formative and celebrative challenge for the Americas, in preparation for EMM OCT2019 and the Special Synod for Evangelization in Amazonia. Regarding Europe, we think it opportune that the local European Churches, with human and economic resources, together with the PMS National Directorates contrive their own forms of theological reflection and missionary formation regarding the missio ad gentes".
Finally, with regard to missionary charity, the PMS Fundraising Committee and some National Directorates were asked to contribute with a reflection on fundraising, missio ad gentes and local Churches. "The task of rethinking the economic-material dimension of the PMS, and rooting this in the mission of announcing the Gospel and building up the Church, will be of great benefit for everyone", concluded Fr. Meroni. (SL) (Agenzia Fides, 30/05/2018)