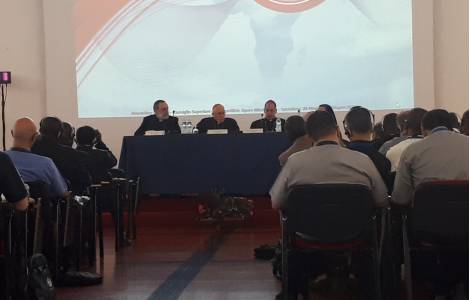 Sacrofano (Agenzia Fides) - "The announcement of the Extraordinary Missionary Month of October 2019 by Pope Francis, inspires me to dedicate my reflection on the Pontifical Mission Societies around this providential opportunity": with these words Cardinal Fernando Filoni, Prefect of the Prefect of the Congregation for the Evangelization of Peoples and President of the Supreme Committee of the Pontifical Mission Societies, this morning opened the works of the Annual General Assembly of the Pontifical Mission Societies (PMS) (see Fides 25/5/2018) .
"October 2019 should help all the People of God renew their awareness of baptismal responsibility regarding the Church's mission for the evangelization of the whole world - the Cardinal underlined -. Therefore we can clearly reiterate that the purpose of this ecclesial initiative is in wanting to pray, in desiring to be educated by the example of so many holy witnesses and martyrs of mission, in reflecting and living fraternal charity so that the missio ad gentes becomes paradigm, source, exemplary and inspiring model, criterion of work and evaluation of all the work of the Church".
"To evangelically renew the mission of the Church in the world is what Benedict XV asked in Maximum Illud. The same pressing invitation was repeated by Pope Francis: renew with the Gospel and reform with the mission are the two aspects that express an explicit request for a renewed conversion of the Church to Christ", he reiterated. In this regard the Prefect of the Missionary Dicastery focused on two aspects: "holiness as a form of our Christian life and of our personal missionary ecclesial service in the Pontifical Mission Societies, and the reform for ecclesial sanctity of our structures as Pontifical Mission Societies".
Starting from the statement of Maximun Illud "for the man who preaches God must himself be a man", Cardinal Filoni thanked the National Directors for their service to mission, and stressed that "everything we are and do is the result of our personal encounter with Jesus Christ alive in his Holy Church". The Cardinal also defined the transparency of the administration of the national directorates, of the collection and transfer of funds collected for the mission of the Church as "an objective form of holiness": "The administrative transparency of the International Secretariats, of the National and Diocesan Directorates becomes in turn, a demanding stimulus and challenge for the particular Churches to be honest and transparent in collecting and delivering the contribution that the faithful and pastors wish to give to the Holy Father for the commitment of evangelization of the whole world".
The Extraordinary Missionary Month of October 2019 is a providential occasion to "courageously look at the urgent need for reform of the structures of the Pontifical Mission Societies", the Cardinal continued, inviting "to look at the central, national and diocesan structures of the PMS to measure, in the light of the mission, their effectiveness in sanctification and in service". In this journey he hoped that "even the structures of the Pontifical Mission Societies can reflect the invitation to evangelically renew the Church's mission in today's world". The heart around which to think of a substantial restructuring of the Pontifical Mission Societies is "the formation to mission with the specific paradigm of the missio ad gentes".
On this theme he made some underlining points: missionary animation represents the effort of renewal of all the Societies; to be formed for the mission of Jesus in the Church means serving the communication of the Gospel as proclamation and witness; it is necessary to have baptismal awareness of the Catholic dimension of the Christian faith; mission represents the inner dynamics of faith; an integral commitment of education in the Christian faith is needed where the intellectual and didactic dimension is placed at the service and is well integrated with the need for a conversion of life and with the commitment of witness.
The Prefect of the Missionary Dicastery exhorted: "Let us renew our commitment on the path towards the unity of the four Societies, born individually, inspired by the same charismatic desire to serve the mission of the Church and the baptismal responsibility of the whole People of God where prayer, spiritual offering, material aid and theological reflection must be articulated within an organic process of ongoing missionary formation". In part this journey has already been done, and is continuing in the preparation for the Extraordinary Missionary Month. "This is not a process of unification, but a synergy of work and of a communion in service", said Cardinal Filoni, who concluded by reaffirming this priority: "Missionary formation cannot be considered peripheral in the ordinary life of the pastoral care of the dioceses and parishes, associations and ecclesial movements. It is an essential dimension. The National and Diocesan Directors should be the ecclesial tool that the Bishops have at their disposal to fulfill their pastoral responsibility to make mission a true paradigm of the life and action of the particular Churches entrusted to them". (SL) (Agenzia Fides, 28/05/2018)