VATICAN - Pope Francis: let us pray to Our Lady of Sheshan for reconciliation among Chinese Catholics 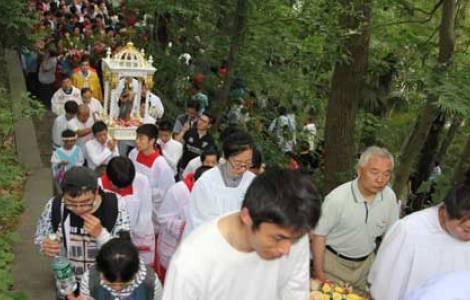 Rome (Agenzia Fides) - The Feast of the Virgin Mary "Help of Christians", particularly venerated in the Marian shrine of Sheshan, near Shanghai, "invites us to be spiritually united to all the Catholic faithful who live in China". The Pope’s prayer came at the end of today’s general audience and on the eve of the feast of the Blessed Virgin Mary Help of Christians, "so that they may live their faith with generosity and serenity, and so that they may carry out concrete gestures of fraternity, concord and reconciliation, in full communion with the Successor of Peter". Since 2008, the Day of Prayer for the Church in China, established by Pope Benedict XVI, is celebrated on May 24th, all over the world. Referring to this anniversary, Pope Francis also addressed the "dearest disciples of the Lord in China", reminding them that "the universal Church prays with you and for you, so that even amid difficulties you may continue to entrust yourselves to the will of God. Our Lady will never fail to help you and will safeguard you with her maternal love".

In the Letter to Chinese Catholics, signed on May 27, 2007, on the solemnity of Pentecost, Benedict XVI had suggested that May 24, dedicated to the liturgical memorial of the Blessed Virgin Mary, Help of Christians - venerated "with such devotion in the Marian shrine of Sheshan in Shanghai" - could in the future become an occasion for the Catholics of the whole world to be united in prayer with the Church which is in China". To this end, the then reigning Pontiff had established on that date the "Day of Prayer for the Church in China", to be celebrated in all the Catholic communities of the world. "I encourage you to celebrate it" wrote Benedict XVI "by renewing your communion of faith in Jesus our Lord and of faithfulness to the Pope, and by praying that the unity among you may become ever deeper and more visible. I remind you, moreover, of the commandment that Jesus gave us, to love our enemies and to pray for those who persecute us, as well as the invitation of the Apostle Saint Paul: «First of all, then, I urge that supplications, prayers, intercessions, and thanksgivings be made for all men, for kings and all who are in high positions, that we may lead a quiet and peaceable life, godly and respectful in every way. This is good, and it is acceptable in the sight of God our Saviour, who desires all men to be saved and to come to the knowledge of the truth» (1 Tim 2:1-4)".
In that letter the Pontiff, always addressed to Chinese Catholics, had also added that on that same day "the Catholics of the whole world - in particular those who are of Chinese origin - will demonstrate their fraternal solidarity and solicitude for you, asking the Lord of history for the gift of perseverance in witness, in the certainty that your sufferings past and present for the Holy Name of Jesus and your intrepid loyalty to his Vicar on earth will be rewarded, even if at times everything can seem a failure". (GV) (Agenzia Fides, 23/5/2018)

AFRICA/ANGOLA - PMS Solidarity Fund: "In this period people need the Word, but also bread to survive"

AMERICA/HAITI - Despite the pandemic, Haitians celebrate Our Lady of Perpetual Help, invoking her to get out of the crisis

AFRICA/IVORY COAST - The Marian shrine of Our Lady of Africa, among the shrines that will join the Pope in the Marian prayer