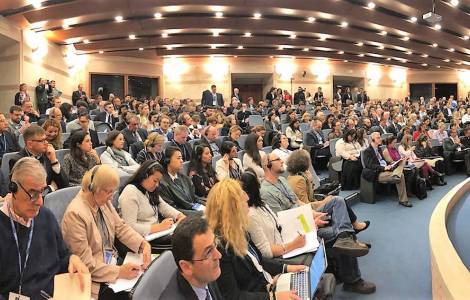 2019-10-24
Forming young people to the mission: the new proposal of the Comboni family begins

Rome (Agenzia Fides) - "The Church has much to work on issues of dialogue, respect and freedom of expression, especially when it must communicate opinions on social issues, trying to clearly express the values of the Church as an institution". This is what Father Hector Aranda Mella, director of the Diocesan Council for Communications of the diocese of Chillán, Chile said to Agenzia Fides, who is in Rome to attend the XI Professional Seminar for Church Communications Offices, which takes place from 17 to 19 April at the Pontifical University of Santa Croce, on the theme "Dialogue, respect and freedom of expression in the public sphere".
"One of the points that were discussed - says Fr. Hector speaking of the Seminar - concerned the Church's need to clearly define the values she intends to communicate, without forgetting that everything she says must be supported by credibility". Furthermore, he continues, "we must be willing to listen to the other" and when messages are delivered to the public sphere "we must do it with a sense of humanity, without losing sight of the person".
The Congress is attended by 400 people from different countries, including communication professionals, directors and heads of the press offices of the dioceses, of the Episcopal Conferences and of other ecclesial bodies, as well as university professors and journalists.
Among the speakers there is prof. Juan Pablo Cannata, Head of the Applied
Communication Studies Center, Universidad Austral, in Argentina, who told Fides: "We live in societies that stand out for their plurality, in which people have different proposals on values, on how to live, how to organize society, education, and all other social problems", therefore if one wants to build that 'culture of encounter' that Pope Francis promotes, "it is fundamental to try to create the conditions so that there is a possible dialogue on these substantial issues" says prof. Cannata. To achieve this goal, one of the elements that the professor emphasizes as essential is "the need for coherence, which must be both personal and institutional and intellectual. It is not about saying what you think without further clarification, but we must deepen our Christian identity to express our symphony of values" and adds: "it is important that our position is the result of an in-depth analysis ".
The Seminar also addresses the issue of freedom of expression, because the Christian message itself suffers, in many countries, serious limitations in public life, ranging from indirect censorship, with partially biased debates, to genuine persecution. In this regard, Fr. Hector told Fides: "freedom of expression is guaranteed constitutionally in Chile. In 2016, however, the Inter-American Commission on Human Rights presented a report which, while recognizing some considerable progress in this area, also highlights a persistence in practices that violate the freedom of expression and the right of access to information, such as persecution of communicators or the media, repression of demonstrators in the public sphere, restrictions on journalists, communicators and community radio stations ... etc...". Despite these episodes, the director of communications stresses that "there is more freedom of expression in Chile" compared to other countries or compared to the past, as can be seen in the use of social networks.
The Seminar underlined that the offices of ecclesial communication throughout the world have the task of contributing to the irreplaceable social function of free and reliable information, as Pope Francis affirmed in the World Communications Day of 2014: "We need to resolve differences through forms of dialogue that allow us to grow in understanding and respect. The culture of encounter requires that we are willing not only to give, but also to receive from others.The media can help us in this task". (LG) (Agenzia Fides, 18/04/2018)