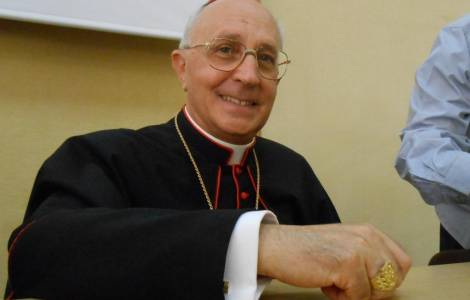 2020-05-12
In times of pandemic, "the missionary creativity of animators and children" and aid from the Special Fund of the PMS

2020-04-27
Pope Francis invites to pray the Rosary: "Our Mother will help us overcome this trial"

2020-04-17
The mission of the Church at the service of the most vulnerable and of the entire human family: a visible sign of the solidarity of the universal Church

Vatican City (Agenzia Fides) - The memory of the beginnings of the Urbaniana University "is the memory of the beginnings of the Congregation for the Evangelization of Peoples and also its projection. In the missionary future outlined by Pope Francis in 'Veritatis gaudium' both of them feel the responsibility towards the new generations of opening a new season of fidelity to the universality of the Gospel of Christ and fidelity to the aspiration of men to their higher and common good". These are the words of Cardinal Fernando Filoni, Prefect of the Congregation for the Evangelization of Peoples and Grand Chancellor of the Pontifical Urbaniana University, delivered this morning in his speech during the Academic Act which took place on the occasion of the patronal feast of the University, on the solemnity of the Annunciation of the Lord. The Feast was dedicated to the "Youth for an outgoing missionary Church".
In his speech on the theme "Evangelization and university education. The actuality of the founding intuition of the Congregation for the Evangelization of Peoples", Cardinal Filoni started from some considerations on the current face of the Church and of the world. "Despite the programs announced and initiatives undertaken - he underlined - there is growing awareness in the Church of the serious risks of pessimism, resignation and even the renunciation of the work of transmission of the Gospel to peoples whose cultures and traditions, in turn , appear to be weakened by the weight of the expansive and pervasive changes produced by both new technologies and new and complex economic-financial processes. The globalization of ‘human things’ reigns in the world". The contradictory effects that characterize today's world require a demanding task of discernment as well as the focus of viable solutions. "Also our attempt to understand how and why evangelization and higher studies must be confirmed in their reciprocal fruitfulness falls into this task", he said.
Cardinal Filoni then focused on the link between evangelization and university formation, highlighted in the Ratio fundamentalis Sacerdotalis, of 8 December 2016: "It was Pope Francis's determination that brought together the well-established system of ecclesiastical studies in the process of 'missionary transformation of an outgoing Church' ... the Holy Father expressly asked that the renewal of the system of ecclesiastical studies play a strategic role in the preparation of the whole People of God to make this transformation ... In concrete terms, ecclesiastical universities are urged to organize themselves as 'providential laboratories' of the outgoing missionary Church".
The request of hope for individuals, cultures and peoples, which rises from the torn and confused world of today, makes us feel the urgency "of seeking ways to revive the missionary dynamism of believers in Christ, the Savior and the salvation of all man and of all humanity".
Therefore the Grand Chancellor of the Pontifical Urbaniana University focused on reflecting on young people, whose number on a world scale has never been as high as today. "It is not infrequent that you look at the youth world without sympathy or even fear", he said, "and it shows the real and imaginary danger. The problem is that the 'youth question', whose existence is undeniable, cannot be reduced to the 'economic question' or to the 'political-ideological question'. When instead it is a serious and vital 'anthropological question' in view of a future worthy of "the whole man and of humanity". In many circumstances Pope Francis stressed the need for greater protagonism of the young and reaffirmed his trust in them in the context of the formation of the missionary-disciples, as witnessed by the convocation of a Synod dedicated to the world of youth.
Cardinal Filoni then stressed that "the link between evangelization and university formation was at the origin of the missionary history of the «Sacred Congregation of Cardinals De Propaganda Fide» inherited from the current Congregation for the Evangelization of Peoples" and retracing the main historical documents, has shown how, from the beginning, the professors and disciples of the Urban College and the Secretary and Cardinals of the Congregation De Propaganda Fide, in full synergy, gave life to a missionary system of ecclesiastical studies very close to the system indicated in the 'Veritatis gaudium' of Pope Francis, that is "a sort of providential laboratory in which the Church exercises the performative interpretation of reality ...". "If the founding intuition of the Congregation for the Evangelization of Peoples - he concluded - is seen in this extraordinary organicity of the missionary dynamic embodied in the synergistic work of complementary entities, it will not be difficult to see its fruitful relevance". (SL) (Agenzia Fides, 10/04/2018)