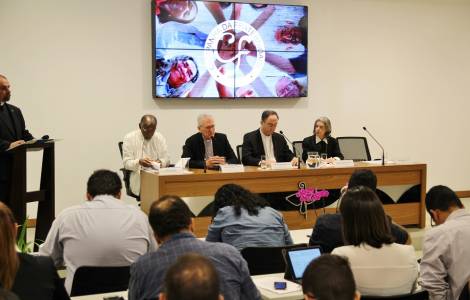 Brasilia (Agenzia Fides) - Violence marks daily life in Brazil, a country where 13% of the world’s murders occur, although its population represents only 3%. Every hour five people are killed by firearms. The National Conference of Bishops of Brazil (CNBB) has therefore proposed that during this Lent, through the Fraternity Campaign that every year begins on Ash Wednesday, one has to reflect on the need to overcome violence.
In the presentation of the Campaign, which is entitled "Fraternity and overcoming violence" and the motto is "You are all brothers", held yesterday, February 14, a message was sent for the occasion by Pope Francis, in which he invites "to the forgiveness received and offered "even if it is difficult, because "forgiveness is the tool to achieve serenity of the heart, and peace". "Setting aside resentment, anger, violence and revenge - says the Pope in his message - are necessary conditions for living as brothers and sisters and overcoming violence". Furthermore, the Holy Father invites us to "be protagonists in overcoming violence by being heralds and builders of peace". A peace – he continues - that is the fruit of the integral development of all, a peace that is born of a new relation also with all creatures".
Because peace "is woven in day-to-day life with patience and mercy, within the family, in the dynamics of community, in work relations, in relation to nature", wrote the Pope in the message addressed to Cardinal Sergio da Rocha, Archbishop of Brasilia and President of the CNBB, concluding with the hope that everyone will find "ways to overcome violence by living increasingly as brothers and sisters in Christ".
According to the Youth Vulnerability Index to Violence (IVJ), elaborated by the National Youth Secretariat, of UNESCO in Brazil and the Brazilian Public Security Forum, the murders of young people between 15 and 24 years of age represented 52.63% of the total in Brazil in 2017. Women's homicides, domestic violence, and rapes are increasing (estimated to be over 450,000 per year). There are phenomena such as exploitation and sexual trafficking of minors, abuses against rural workers, an increase in murders and threats against indigenous peoples, whose lands are invaded and devastated.
In the text of the Campaign, prepared by the Episcopal Conference, it is stated that there is an "extermination of specific segments of the population: the young, the blacks and the poorest" and "a growing distrust towards justice and the police". All this in a country with over 650,000 inmates, some of whom control criminal organizations from inside the prisons.
These data confirm the words of Cardinal Sergio da Rocha during the presentation of the Campaign, which according to the statement sent to Agenzia Fides highlighted: "life, the dignity of the people, of the most vulnerable social groups, are often affected". Since violence is a complex reality "although everyone's action is important, community actions are needed". Hence the appeal that the Church of Brazil, through the Fraternity Campaign, addresses to the entire Brazilian society. (LMM/LG) (Agenzia Fides, 15/02/2018)

AMERICA/DOMINICAN REP. - Bishops call for calm and common sense after the suspension of the municipal elections