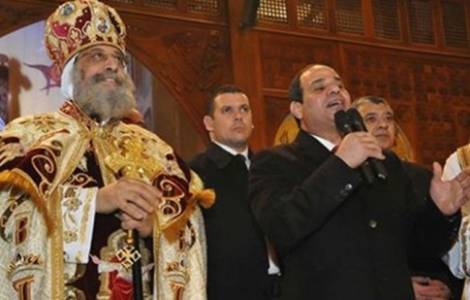 2020-05-11
Pope Francis calls Coptic Patriarch Tawadros: let us together ask God to have mercy on the world

2020-05-04
Lockdown due to Covid-19, Coptic Patriarch Tawadros authorizes the celebration of weddings

2020-04-16
The Library in Alexandria offers online lessons on St. Corona, to be invoked during pandemics

2020-03-24
Theodoros, Orthodox Patriarch of Alexandria: The world is entering an apocalyptic time

2020-03-20
From Patriarch Tawadros a spiritual thought a day, in the time of the global epidemic

Cairo (Agenzia Fides) - The Egyptian parliament's foreign affairs committee has finished drafting a response to a memorandum on "Coptic issues" in Egypt, that was made public on December 21 by six members of the US Congress. On Monday 22 January, The head of the Egyptian parliament's foreign affairs committee, Tarek Radwan, announced that the six-page response document will be sent to the US Congress, with the main objective of refuting the claims made in the Coptic Solidarity memorandum, which claims that there is systematic discrimination against Copts in Egypt by the government under President Abdel-Fattah al-Sisi's administration. The committee's document argues that "under the 25 January Revolution in Egypt in 2011, which led to the fall of the Hosni Mubarak regime, Muslims and Copts showed firm unity again, and stressed the importance of the principle of 'citizenship' as the rule governing all Egyptians, regardless of religion, colour or race. The response goes on to identify the Muslim Brotherhood as a primary cause of sectarian strife in Egypt in recent times. The Muslim Brotherhood came to power in Egypt in 2012, whose government, led by Mohamed Morsi, was overthrown in June 2013, after the protest demonstrations supported by tens of millions of Egyptians, Christians and Muslims. The revolution of 30 June 2013 - reads the text - was one against turning Egypt into a sectarian state, but after the revolution, members of the Muslim Brotherhood and its affiliated terrorist groups embarked upon torching Coptic churches across Egypt, increasing sectarian violence and even the massacres of Coptic Christians perpetrated by jihadist gangs. After the removal of the Muslim Brotherhood regime - insists the text prepared by the Egyptian parliament commission - the Egyptian government was keen to address Coptic grievances in terms of re-implementing the principles of "citizenship" on the ground. The Egyptian army "embarked upon rebuilding and renovating as many as 83 churches across Egypt", while Article 244 of the Constitution "helped Christians gain 39 seats in parliament for the first time", and a new law was passed in August 2016 making it easier for Christians in general and Copts in particular to build churches. Parliament will soon embark upon discussing a draft law on establishing a national anti-discrimination commission to ensure that no religious minorities in Egypt face any kind of persecution or discrimination. The committe's response concludes by quoting Coptic Pope Tawadros II, who said: "It is better to have a homeland without churches than to have churches without a homeland", to attest how the Copts claim at all times their physiognomy of native Church and constitutive component of the Egyptian nation.
The draft resolution on the alarm "for the attacks against Coptic Christians in Egypt", submitted to the US Congress by six US parliamentarians on December 21, had already provoked controversy in Egypt, even by Egyptian parliamentarians of the Coptic faith (see Fides 28/12/2017). In the text of that draft parliamentary resolution, after a brief description of events concerning the Christian communities in Egypt, the Congress was asked to recall the Egyptian government "to carry out serious and legitimate reforms to guarantee Coptic Christians the same rights and the same opportunities as all other Egyptian citizens". In particular, the urgent need for measures by the Egyptian authorities to reform education that guarantees "the teaching of all religions" and "a political reform that guarantees human rights, fundamental freedoms and the rule of law".
Egyptian Hafez Abu Saada, member of the National Human Rights Council, also known outside of Egypt for his campaigns in defense of the rights of citizenship in his homeland, said that the US resolution should be considered only as an instrument used by the US to put political pressure on the Egyptian government.
According to Hafez Abu Saada, in today's Egypt there are no "institutionalized" discriminations against Christians, and the persistence of sectarian violence and intimidation against the Copts cannot be attributed to the current political leadership (GV) (Agenzia Fides, 23/1/2018)

ASIA/PAKISTAN - Cardinal Coutts: "We serve people without any discrimination, in the time of Covid-19"

ASIA/PAKISTAN - Ecological operators, almost all non-Muslims, at high risk of contagion for coronavirus

ASIA/INDONESIA - The Director of the Pontifical Mission Societies: "Democracy is solid, the future is civil coexistence"