AMERICA/PERU - The Pope will bless local devotions and patron images, which have kept the flame of Catholicism in Peru burning 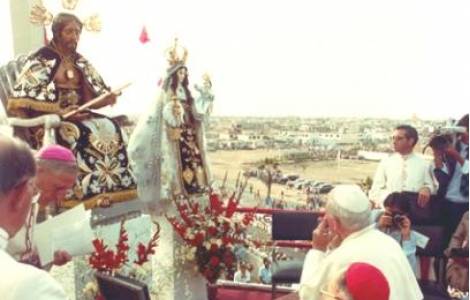 Lima (Agenzia Fides) - "El Señor del Mar" (The Lord of the Sea) and the Virgin of Carmen will be the first religious images that will welcome Pope Francis when he arrives in Peru on the afternoon of Thursday 18 January. Moreover, in his first itinerary, the images of San Martin de Porres, Santa Rosa de Lima and San Juan Masias will be placed. The theme of the presence of sacred images was discussed in various coordination and logistical meetings that were carried out by the ecclesial authorities who have been organizing the Holy Father's visit for months. This is due to the importance they have within the Peruvian religiosity.
In this regard, José Antonio Benito Rodríguez, Secretary of the Peruvian Academy of Church History, explains to Agenzia Fides that in the various Peruvian museums one can "see how sacred images have been fundamental for catechesis and devotion. One simply has to look in one of our churches, to see more expressions of popular religiosity. Even in our parks and markets the widespread images is evident", says Benito Rodríguez, who is also a professor at the Sedes Sapientiae Catholic University and the Pontifical and Civil University of Theology of Lima.
Professor Benito Rodríguez, citing Pope Benedict XVI, emphasizes that piety is "the precious treasure of the Catholic Church in Latin America" and that, therefore, "deserves our respect and our affection, because piety reflects the thirst for God that only the poor and the simple can know". The historian explained to Fides that "daily religiosity is the result of the synthesis of the beliefs and ordinary practices of society that are embodied in the culture of a people".
The five confraternities of Madre de Dios and Cusco that will be blessed by Pope Francis on January 19 in Puerto Maldonado, expressions of local devotion, are those of the Lord of Qoyllority, of the Lord of Torrechayoc, of the Lord of Huanca, the Confraternity of the Holy Cross and of the Lord of Miracles.
Benito Rodríguez explains that the profiles of these confraternities and images are popular expressions that respond to the "love of the suffering Christ, the God of compassion, of forgiveness and reconciliation, the God who gave himself".
On his behalf, Luis Benavente, a political analyst, told Fides that "in Peru there is a combination of icons and universal images of the Catholic religion, such as the heart of Jesus or the Virgin, which are added to the local and particular images that are typical of the Peruvian Andean areas. These popular images - continues Benavente - are very important in Peru and Pope Francis is doing the right thing in coming to bless and welcome them, because these images are those that have kept the flame of Catholicism in Peru burning". (D.B.) (Agenzia Fides, 18/1/2018)

AFRICA/EGYPT - Patriarch Tawadros II on the Feast of the Entry of the Holy Family: “A Blessing for the Country”

ASIA/MONGOLIA - Msgr. Marengo: "We must preach the Gospel with a whisper"