AMERICA/CHILE - Jesuit Fernando Montes: the strategy of tension that obscures the "Mapuche issue" 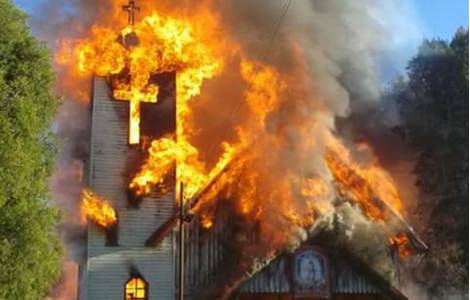 2020-06-05
Bishops: "we expect willingness and commitment from political authorities and social leaders in order to reach a social pact"

Santiago de Chile (Agenzia Fides) - The episodes of violence recorded in recent years and connected to the "Mapuche issue", including the fires of Catholic and Evangelical churches, have the effect of sabotaging every serious assumption of responsibility in the face of the problems posed by indigenous peoples: "There is the danger that all the attention of Chileans focuses on these facts of violence, and not on the situation of injustice, violation of rights that has its roots in the past and still continues". The alarm was raised by Chilean Jesuit Fernando Montes Matte, former rector of the Alberto Hurtado University. 78 years old, a figure present in the Chilean public debate, Father Montes led the Chilean Jesuit University from 1999 - the year of its foundation - until 2016. And in the early sixties of last century he was also a fellow student of Jorge Mario Bergoglio, today Pope Francis.


Violence and forest enterprises
In Chile we discuss the nature of acts of violence carried out with claims that refer to the Mapuche cause. Some ask if they can be read as acts of terrorism or if they are isolated gestures of delinquency. Several trials have been opened by the judicial authorities. "It is deplorable", declares Father Montes to Agenzia Fides, "that attention is focused on the repressive measures to be adopted and on the presence of the police, rather than on the problems underlying these isolated and certainly deplorable acts. "It is a fact", the Jesuit continues "that violence comes from minority groups, and cannot be attributed to the Mapuche people as such. Of course, it is important to oppose violence, but it is essential that attention should not be diverted from what should be involved as a priority: extreme poverty of places, the trampled rights of native peoples and the lack of respect for their culture".
In recent years - Father Montes pointed out in his conversation with Agenzia Fides - large forest enterprises have established themselves in the region, which have had serious effects on ecology due to the type of plantations they produce. It could be said that much of the violence was exercised against these forest enterprises".
In this situation, according to the former rector of the Jesuit University, the Church can also contribute to highlighting the real condition of the Mapuche people, taking the requests for the return of at least part of the lands claimed seriously and recalling the necessary social development of all the area. "If one really wants to integrate Mapuche citizens in Chile," the Chilean Jesuit points out, "it is also essential that they acquire levels of appropriate participation in the conduct of the entire Country". It is necessary to "defend the victims from acts of violence", without forgetting that those who have been trampled on their rights are victims of violence". Christians can help to take into account all the factors at stake in the Mapuche issue, so as to favor "a just, fraternal and peaceful relationship with the entire original people of that area".

The Jesuits, the Church and the Mapuche issue
When Pope Francis, for his short trip to Chile, chose the city of Temuco among his destinations, located in the ancestral territory of the Mapuche people, "we all understood", Father Fernando Montes recalls today "that this choice expressed the Pope's interest in the problems that currently exist with the original people of our Country". According to the Chilean Jesuit, the Pope "could help everyone to ask forgiveness, with humility, for the things we have been responsible for. His presence should help us not to divert our attention from the underlying problem".
The Jesuits today have a community in the heart of the Mapuche territory. And the link between the spiritual children of St. Ignatius and the history of the Mapuche has deep roots.
"The Mapuche" recalls Father Montes "managed to resist the Inca empire. The Spanish discoverer of Chile had to leave and return to Peru. When the conquerors returned, the Mapuche killed the first governor and one of his successors. Then, the Jesuits learned the language of the Mapuches, and went to speak with the King of Spain to say that one could not impose faith by force, and convince him to end the offensive war against that people". The Society of Jesus already in 1620, during its general provincial congregation, drew the attention to the need to put an end to enslaved work, and to favor other conditions. "It was", remembers the former rector of the University Alberto Hurtado, "a first-class social document. And it attested a conquest carried out in a shameful manner". (GV) (Agenzia Fides, 12/1/2018)

AMERICA/BOLIVIA - The forest has been burning for two months: the Bishops ask for the intervention of authorities and harsh sanctions for those responsible

ASIA/THAILAND - “The cycle of time resumes ”: risen with Christ, Christians look to the future