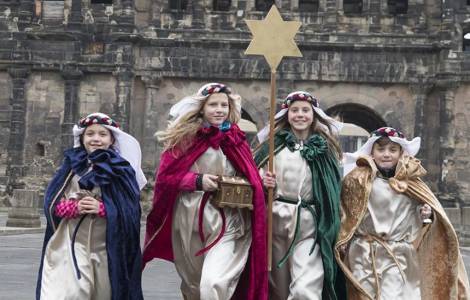 2019-05-29
Confirmation of the National Director of the Pontifical Mission Societies, Mgr. Wolfgang Huber

Aachen (Fides) - More than 2,600 "Star Singers" (Sternsinger) of the Holy Childhood Association in Germany will participate at the official inauguration of their 60th Annual Campaign in Trier (Germany) on Friday, December 29th: "Bring blessing, be blessing. Together against child labor, in India and all over the world", is the motto of the 2018 Campaign.
Dressed in their costumes of Magi, with their Star and their songs during Christmas time and in the early days of the new year the "Star Singers" go around visiting German homes. About 300 thousand children from Catholic parishes in Germany will carry the "C+M+ B" blessing ("Christus mansionem benedicat - Christ bless this house") to the families, collecting donations for other children their age who suffer throughout the world. The "Star Singers campaign collection" stresses Archbishop Giampietro Dal Toso, President of the Pontifical Mission Societies "suggests something interesting and important to the whole Church. The Singers follow the star: who follows this star finds Jesus, who through his incarnation shared life with men. Sharing, which is at the center of this initiative, wants to be a sign of this too. We are all grateful to the Star Singers, who with their sharing of earthly goods show us He who shares life with us".
The fight against child exploitation is at the center of the annual campaign promoted in 2018 by the Holy Childhood Association in Germany
(Kindermissionswerk/Die Sternsinger) in collaboration with the German Catholic Youth Union (Bund der Deutschen Katholischen Jugend, BDKJ). The Country at the center of this year's initiatives is India, a nation with the highest number of underage workers worldwide. According to data released by the International Labor Organization (ILO), 168 million children and young people aged between 5 to 17 work many hours a day worldwide, 11 percent of the world's child population. Among them, about 85 million children, boys and girls are exploited.
"To get girls and boys out of child labor", underlines Mgr. Klaus Krämer, President of the Holy Childhood Association in Germany "we need alternatives. For us these alternatives consist in offering access to education, because only if children are supported in their human, spiritual and cultural growth they can one day lead an independent life. We try to achieve this with our local partners, through 977 education programs launched around the world. Many children who work to help support their family", adds Krämer "cannot attend school. Our highest priority is to stop this vicious circle".
The "Star Singers" collection in Germany, inaugurated in 1959, has become the largest solidarity initiative in the world, allowing children to help other people their age who are in need. Since then, more than one billion euros have been collected, and with these funds more than 71,700 projects have been carried out for children in Africa, Latin America, Asia, Oceania and Eastern Europe.
The annual campaign takes place mainly in German-speaking regions and in various European countries such as Austria, Switzerland, Italy (South Tyrol), Slovenia, Hungary and Slovakia, united in the European network of Star Singers. Star Singers groups from Austria, Switzerland, South Tyrol, Hungary, Romania and Slovakia will attend Mass with Pope Francis in St. Peter's Basilica, next January 1, 2018.
Since December 4 the missionary initiative tradition of the "Star Singers" ("Sternsingen") is part of the intangible Cultural Heritage of UNESCO (see Fides 18/12/2015). For further information://www.sternsinger.de/;https://www.dka.at/sternsingen/;https://www.missio.ch/kinder-und-jugend/sthttpsernsingen.html (MS) (Agenzia Fides, 28/12/2017).