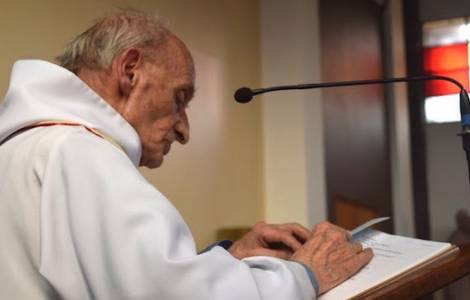 2019-02-07
MEP colloquium: Theology of the mission ad gentes, towards the Extraordinary Missionary Month

2018-06-05
Appointment of National Director of the PMS, His Exc. Msgr. Michel Dubost

2018-01-26
Revitalize the missionary commitment to listening to Christ

2017-08-04
Cardinal Filoni: may the saintly Curè d'Ars accompany the priests and seminarians in our young Churches

Rouen (Agenzia Fides) – Fr. Jacques Hamel, 84, had his throat cut while he was celebrating mass in Saint Etienne du Rouvray church, Normandy (France) on the morning of July 26, 2016. Two men entered the church during the celebration, killed the priest at the altar and wounded three of the faithful present and two religious Sisters were taken hostage while a third managed to escape and call the police. The murderers were killed by the police (see Fides 26/7/2016).
On the first anniversary of the tragic event, tomorrow, in the same church and at the same time Fr. Hamel was celebrating Mass, at 9 o'clock, the Archbishop of Rouen, His Exc. Mgr. Dominique Lebrun, will celebrate Holy Mass in front of a packed church and television cameras. According to information released by the Archdiocese, during the rite, four floral compositions will be placed in front of the cross, the Paschal candle, the altar, and the image of the Virgin Mary. A monument in honour of murdered French priest will be unveiled by the local authority of Saint-Etienne-du-Rouvray. In the afternoon, at 6pm, in the Notre-Dame de Bonsecours basilica vespers will be celebrated followed by a moment of prayer on Fr. Hamel’s tomb. Other initiatives in memory of Fr. Hamel and for peace have been organized in several communities.
The Archbishop of Marseilles, His Exc. Mgr. Georges Pontier, President of the French Bishops' Conference, in his message for the anniversary stresses that "it was a horrendous incident, we were speechless". Quoting the words of Fr. Jacques’ sister, according to whom the brother priest was first of all "a man among men," the message continues: "It is this man among men who was killed. It is this man among men, this priest, who has become the symbol of a life lived with others, for others, a life of daily fidelity, a life rooted in the love of He who made himself One of us for love, Christ. Such a life becomes a model and encouragement for everyone".
Pope Francis granted a dispensation to open, a few months after his death on April 13, 2017, the diocesan phase of the Beatification process of Fr. Hamel. (SL) (Agenzia Fides, 25/7/2017)