VATICAN - Cardinal Dias: "Our Lady was the godmother of my priesthood"

Wednesday, 21 June 2017 congregation for the evangelization of peoples 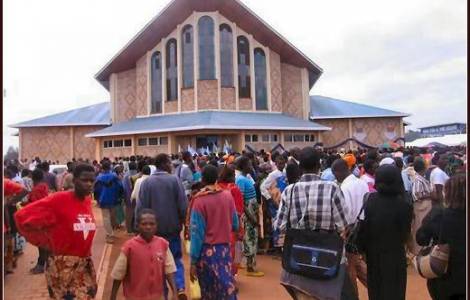 Vatican City (Agenzia Fides) - The first Eucharistic Concelebration in the Chapel of the Palazzo di Propaganda Fide, after his appointment as Prefect of the Congregation for the Evangelization of Peoples, was presided by Cardinal Ivan Dias on July 3, 2006, on the feast of the Apostle Thomas, the great evangelizer of India. In that circumstance, he invited Superiors, officials and all the staff of the Missionary Dicastery and of the Pontifical Mission Societies present at Mass to imitate the missionary zeal of St Thomas with mind and heart: "May our service be impregnated by the conviction that Jesus Christ is the only Savior of the world, the way, the truth, and life, and animated by the zeal of St. Thomas for the Church and for the Kingdom of God".
The deep Marian spirituality of Cardinal Dias was expressed, in addition to daily life, above all in the most significant stages of his ministry. On the day of the XXV anniversary of his episcopal ordination, on June 19, 2007, in the Chapel of the Pontifical Urban College, he said, "I place these 25 years of Episcopal ministry in the Immaculate Heart of Mary, because Mary has sealed my entire Episcopate, and with Her I repeat to the Lord: I am your servant, according to my episcopal motto". Even on the 50th anniversary of priestly ordination, on December 9, 2008, he expressed the same sentiment: "I feel the duty to express my affectionate gratitude to Mary Most Holy, to whom I have consecrated my priesthood, as a slave of Love to the school of Saint Luigi-Maria Grignion de Montfort. My episcopal motto 'servus' is inspired by her spirituality. My Lady was therefore the godmother of my priesthood, she was always by my side as a Mother, Teacher and Queen".
On November 28, 2007, Cardinal Dias presided the closing of the Jubilee Year of the XXV anniversary of the first appearance of the Virgin Mary in that place, in Kibeho (Rwanda), the diocese of Gikongoro. In Lourdes he inaugurated the Celebratory Year of the 90th anniversary of the apparitions (December 8, 2007-2008). In the homily he said among other things: "Let us pray for Our Lady so that she strengthens us in the spiritual struggle of each day so that we can fully live our Christian faith by practicing virtues that distinguish the Virgin Mary, the fiat, the magnificat and the stabat: this means intrepid faith (fiat), joy (magnificat), and unbiased fidelity (stabat)".
Numerous were the speeches, messages and travels of Cardinal Dias as Prefect of the Missionary Dicastery. In the Message to the First Western Africa Missionary Congress, which opened on November 15, 2006 in Ouagadougou, Burkina Faso, he wrote: "For the Congregation for the Evangelization of Peoples, missionary formation of the apostolic staff is the priority of priorities. The missionary spirit can not progress if Bishops, priests, religious and laity do not take a lively conscience that the announcement of the Gospel message is deeply written in their vocation as consecrated".
In Abidjan, Côte d'Ivoire, Cardinal Dias delivered a speech to the Bishops gathered for the XVII Assembly of CERAO, held from 2 to 8 February 2009. "Challenges are not lacking in Africa and these worry the hearts of Pastors – he said in his speech -: the growth and the human, priestly, spiritual, moral qualities and holiness of your priests and of all the people of God (...). I want to draw your attention to the challenges that might come from outside because of globalization". That is why "the severity of the challenges invites Pastors like you to foresight, discernment and reflection".
At the Lambeth Conference, the ten-year meeting of all Anglican Bishops of the World, which took place in Canterbury (England) from July 16 to August 3, 2008, Cardinal Ivan Dias spoke of "Mission, Social Justice and Evangelization"; he recalled that today the world needs people who witness "the beauty of Christian faith without shame or compromise".
In his comment on the Missionary Intention for October 2006, Cardinal Dias exhorted: "The humanity of the third millennium needs Christ more than ever, to know the Father's love and the strength of his Spirit. It is still necessary today to become missionaries for this troubled and restless humanity, because those who have not yet heard of Jesus Christ can know him and those who have denied him with their behavior can return to the right path". (SL) (Agenzia Fides, 21/6/2017)