VATICAN - Cardinal Ivan Dias, Prefect Emeritus of the Congregation for the Evangelization of Peoples, passes away

Tuesday, 20 June 2017 congregation for the evangelization of peoples 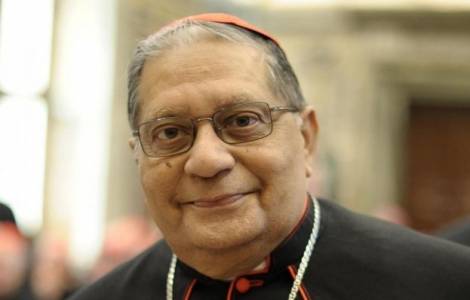 Vatican City (Agenzia Fides) - Cardinal Ivan Dias, (81) Prefect Emeritus of the Congregation for the Evangelisation of Peoples from 20 May 2006 to 9 May 2011, passed away in Rome on Monday 19 June, 2017. He had been ill for a long time.
Cardinal Ivan Dias, Archbishop of Bombay (India), was born in Mumbai on April 14, 1936. He was ordained a priest in Bombay on December 8, 1958. He studied at the Pontifical Ecclesiastical Academy in Rome (1961-1964), and held a doctorate in Canon Law in 1964 from the Pontifical Lateran University. In 1964 he worked in the Vatican Secretariat of State preparing the 1964 visit of Pope Paul VI to Bombay on the occasion of the International Eucharistic Congress.
From 1965 to 1973, he served as secretary of the nunciatures in Denmark, Sweden, Norway, Iceland, Finland, Indonesia, Madagascar, Réunion, the Comoro Islands and Mauritius. Returning to the Secretariat of State in Vatican City, from 1973 and 1982 he was head of the section for the Soviet Union, the Baltic states, Belarus, Ukraine, Poland, Bulgaria, China, Vietnam, Laos, Cambodia, South Africa, Namibia, Lesotho, Swaziland, Zimbabwe, Ethiopia, Rwanda, Burundi, Uganda, Zambia, Kenya and Tanzania. On 8 May 1982, he was appointed Titular Archbishop of Rusibisir and Apostolic Pro-Nuncio to Ghana, Togo and Benin (1982- 1987). He received his episcopal consecration on the following 19 June in St. Peter's Basilica.
From 1987 to 1991 he was Apostolic Pro-Nuncio to South Korea. From 1991 to 1997 Apostolic Nuncio to Albania. On November 8, 1996 he was appointed Archbishop of Bombay. He was created and proclaimed Cardinal in the consistory of 21 February, 2001. On 20 May 2006, Pope Benedict XVI appointed him as Prefect of the Congregation for the Evangelization of Peoples, which he held for a five-year term. The funeral will be celebrated tomorrow, June 21, at 3 pm in the Vatican Basilica. Cardinal Dias will be buried in the Chapel of Propaganda Fide at Verano cemetery, in Rome. (SL) (Agenzia Fides, 20/6/2017)