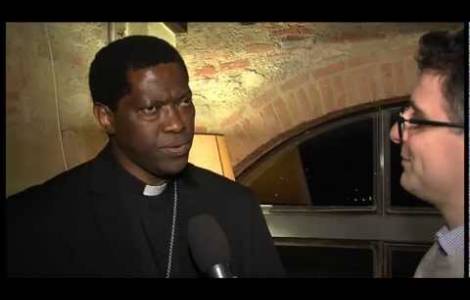 Rome (Agenzia Fides) - "Let us reflect together on the ‘mission heart of the Christian faith’ in the light of the Apostolic Missionary Exhortation of Pope Francis’ Evangelii Gaudium. Let us have the courage of conversion, discernment, and authentic reform of each of us and of the institutions we serve, that is to say the Pontifical Mission Societies". This is how His Exc. Mgr. Protase Rugambwa, Adjunct Secretary of the Congregation for the Evangelization of Peoples and President of the Pontifical Mission Societies (PMS), opened the works of the General Assembly of the PMS this morning, which will take place in Rome until Saturday, June 3 (see Fides 26/5/2017).
In greeting and thanking all those who "work on behalf and in favor of the Pontifical Mission Societies", Archbishop Rugambwa emphasized: "In full communion with the Holy Father, Pope Francis, let us not stop animating each other so that without fear and with great joy, may the announcement of the risen Christ make the Church a community of reconciled, open to welcome everyone, always ready to bring and communicate to everyone the efficacy of salvation. No one is excluded, all at the heart of evangelization, so that Churches rediscover at the center of their Christian faith the only mission assigned to them by the Lord Jesus Christ. "
Tracing a budget of the activities carried out in the past year, the President of the PMS cited the conclusion of the integration work in the Statutes of the texts concerning the Administrative Office and the Finance Committee; the establishment of a humanitarian disaster Committee; the Continental meeting of the National Directors of the PMS, which represent "an important tool for exchanging, verifying and growing of communion and unity at the service of mission and animation".
Mgr. Rugambwa then announced the Holy Father's approval of the proposal to "convene an Extraordinary Missionary Month, in October 2019 to commemorate the centenary of the enactment of the encyclical Maximum illud and to promote the missionary commitment of the Church in line with Evangelii Gaudium". The General Assembly will dedicate some of the work to the topic by elaborating proposals for Missionary October 2019. The President also thanked the Commission that is working on the introduction of a common brand, "to help us better assert the unique identity of PMS internationally in respect of differences and local needs".
In the second part of his speech, Mgr. Rugambwa focused on presenting some challenges, recalling his previous five-year intervention: "We have not yet exhausted our reflection and our discussion of the PMS as Societies which belong to the Pope and Bishops, the relationship between the Universal Mission of the Church and the PMS, their collocation and cooperation with other mission forces, civil law on charitable organizations, prospects and work plans".
The Archbishop thus called for a frank and open confrontation, "on the future of institutions that cannot simply be dragged by the obsolete repetition of what has always been done", to have "boldness and creativity in discerning and rethinking our structures, styles and methods" to "rediscover the mission as the heart of the Christian faith".
"At the center and at the outskirts of our work of animation, collection and distribution - he stressed - we must grow in greater harmony and cooperation thanks to an ever-changing conversion that overcomes inadequate and annoying forms of anti-evangelical attention-seeking behaviour".
Mgr. Rugambwa thus concluded his speech: "These provocations require to be better reflected, thought, analyzed, and prayed. It is not about doing everything and immediately. This is not a violent distortion. It is rather a change of mentality and modes of the apostolic work of the Pontifical Mission Societies. The more we focus on our interest, our passion, the true needs of the mission, the more our conversion takes place, to end protagonism and begin the ecclesial, fraternal and evangelical service that saves". (SL) (Agenzia Fides, 29/5/2017)

AFRICA/IVORY COAST - The celebration of the Missionary Month: the involvement of the local media

EUROPE/AUSTRIA - Towards Mission Sunday: a painting to learn about the life and work of Pauline Jaricot