VATICAN - Consistory for 5 New Cardinals, "be joyous announcers of the Gospel throughout the world" 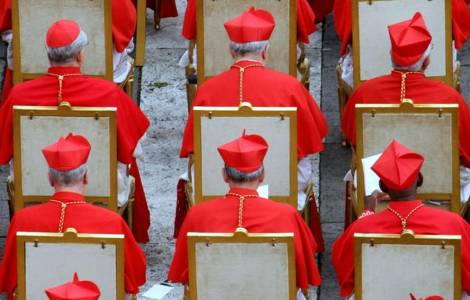 2020-10-19
After the Angelus, Pope Francis recalls the missionaries "who sow the Gospel in the great field of the world"

2020-10-19
India, Panama and Honduras recipients of aid from the PMS Fund for the Covid emergency

2020-10-17
Video message from Cardinal Tagle: "where the most vulnerable and needy are, there are also the missionaries"

Vatican City (Agenzia Fides) - At the end of the Regina Coeli Marian prayer on Sunday 21 May, the Holy Father Francis announced a Consistory on 28 June for the creation of 5 new Cardinals. Two of them, Archbishop of Bamako, Mali, and Apostolic Vicar of Paksé, Laos, are ordinaries of dependent territories on the Congregation for the Evangelization of Peoples. Here are the words of the Pope:
"I wish to announce that on Wednesday, 28 June, there will be a Consistory for the naming of five new cardinals. Their hailing from different parts of the world manifests the Catholicity of the Church spread across the whole World and the assignment of a titular or diaconal church in the City expresses the attachment of the cardinals to the diocese of Rome that, as the well-noted expression of St Ignatius says, presides in charity over all the Churches. On Thursday, 29 June, the solemnity of the Holy Apostles Peter and Paul, I will concelebrate Mass with the new cardinals, the College, with the new metropolitan archbishops, bishops and some priests. Here are the names of the new Cardinals: Mgr. Jean Zerbo, Archbishop of Bamako, Mali; Mgr. Juan José Omella, Archbishop of Barcelona, Spain; Mgr. Anders Arborelius, Bishop of Stockholm, Sweden; Mgr. Louis-Marie Ling Mangkhanekhoun, vicar-apostolic of Paksé, Laos; Mgr. Gregorio Rosa Chavez, Auxiliary of San Salvador, El Savador.
Let us entrust the new cardinals to the protection of Saints Peter and Paul, that with the intercession of the Prince of the Apostles, they might be authentic servants of ecclesial communion and, with that of the Apostle of the Gentiles, they might be joyful messengers of the Gospel for the whole world, and, with their witness and advice, they might sustain me more intensely in my own service as Bishop of Rome and universal Pastor of the Church". (SL) (Agenzia Fides 22/05/2017)

EUROPE/ITALY - Paths for a "missionary" reform of the Church

AFRICA/MALI - "Mgr. Zerbo was pleasantly surprised of the appointment to Cardinal"