EUROPE/SPAIN - Humanitarian projects in favor of refugees and displaced in Lebanon, Thailand and Egypt 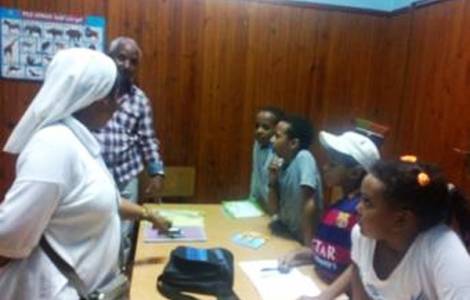 Madrid (Agenzia Fides) - In the world, to date, just over 59 million people have been forced to leave their countries of origin mainly because of wars and internal conflicts. 19 and a half million are refugees, 38 million 200 thousand internally displaced and 1 million 800 thousand are asylum seekers for various causes. On World Refugee Day, which is celebrated on June 20, the Spanish Catholic NGO Manos Unidas has engaged in several humanitarian projects in favor of the displaced in Lebanon, Thailand and Egypt.
In Lebanon, in Tripoli, along with Caritas Lebanon, it has launched a summer project of "Promotion and child protection", which will run for two years, in Maarath district which will help 90 boys and girls together with their families (210 people in total). Of these, 50% are Syrian refugees, 40% Lebanese socially excluded, and the rest Iraqi, Egyptian or Eritrean refugees. Everyone will be offered educational support, legal, health and psychosocial assistance.
In Thailand, where there is the highest number of unregistered refugees in Asia, about 3 million, Manos Unidas will carry out, starting in August, a project of "Empowerment of Burmese workers and their families" which will directly help 8,325 people. The project will take place in the Gran Bangkok underground area and in border area in Kanchanaburi, where it is estimated there are over 350,000 immigrants subject to arrest or deportation.
In Egypt, ultimately, which is experiencing a situation of economic, political and social crisis, and is one of the Countries that welcomes the highest number of refugees from Eritrea, Manos Unidas is finalizing an educational support project for children and Eritrean refugee adults. In Cairo, in the Zamalek district, the NGO has directly assisted 300 young people and 100 children and indirectly helped approximately 2,000 people. The project was carried out with the Comboni Missionary Institute, which has worked for 30 years with the Eritrean community, and has facilities able to provide hospitality and all the necessary support to integrate into Egyptian society. (AP) (Agenzia Fides, 17/06/2016)