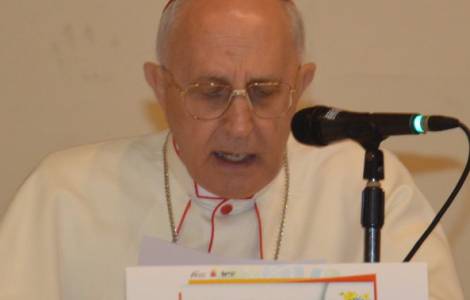 2021-09-13
Pope Francis in Budapest: the Eucharist frees us from false messianisms

2021-09-08
Russian Metropolitan Hilarion: Orthodox and Catholics share the same faith in the real presence of Christ in the Eucharist

2018-09-20
Confirmation of the National Director of the PMS, Fr. Benvin Madassery, SVD

Budapest (Agenzia Fides) - "I think that a knowledge of the history of Christianity in the Middle-East - today Iraq – is not some idle cultural extravaganza, but rather an approach that allows one to understand the reasons for, and the dramatic events, of this region and to appreciate its life and culture, as well as the testimonies of faith and the motives behind the attachment of Christians to this very land". This is what Cardinal Fernando Filoni, Prefect of the Congregation for the Evangelization of Peoples said in his speech at the academic Conference on the religious inpact of immigration on European societies, which takes place today at the National University in Budapest.
The Cardinal spoke on the theme "The Church in Iraq: History, Growth, and Mission from the beginning to the present" since he is the author of a book on the subject, which is being translated into English, Spanish and Arabic", in order to bring attention to the beautiful history of this ancient Oriental Church, also known as the Chaldean Church", of which there was no complete story.
The Church in Iraq has its roots in a "small, ancient Christian Community, which, for two thousand years lived in the region of Mesopotamia" said Cardinal Filoni. "In this region a hundred years ago Christians counted up to 15% of the total population. Today they are down to 1 or 2%! From the time of the Armenian Genocide (1,200,000 victims) and the killing of 250,000 Chaldeans, Armenians, and Syrians, both Catholic and Orthodox, which started an exodus of peoples from the region, these mass migrations have accelerated well into the present day, provoked by wars, discrimination, lack of peaceful coexistence and lack of work".
Cardinal Filoni, who lived in the Middle East for many years and in 2014 was sent to Iraq by Pope Francis as his personal representative, focused on migration stressing that "European societies have never been a «unicum». They were not one yesterday, they are not one today, and they will not be one tomorrow. Europe is more like a container ... ". Despite the diversity, three elements have played a unifying role in Europe: religion, the concept of right linked to the person, beauty and art. "The core reason that has brought about an exodus of biblical proportions of peoples leaving the Middle-East for Europe is the absence of peace", underlined the Cardinal, stressing that "everyone has a right to live in peace, which represents the greatest of all aspirations. All great migrations begin with war". (SL) (Agenzia Fides 17/02/2016)